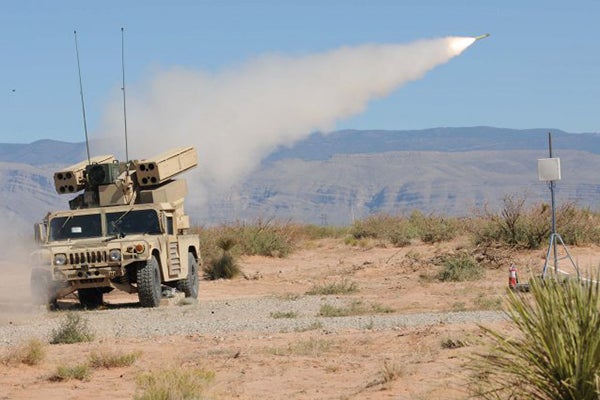 Stinger (FIM-92) is a man-portable air defence system (MANPADS) developed by General Dynamics to provide high accuracy and enhanced air defence capabilities to the armed forces. Raytheon Missile Systems is the primary manufacturer of the Stinger, while the missile is also produced under licence by EADS.

The lethal surface-to-air missile (SAM) can be deployed for defence against all classes of helicopters, unmanned aerial vehicles (UAVs), cruise missiles, as well as low-level fixed and rotary-wing aircraft. It offers supersonic speed and agility.

The US Army deployed the Stinger missiles with the land forces, armed helicopters and Bradley tracked fighting vehicles. The missiles are also used by the US Navy, US Marine Corps, US Air Force (USAF) and a number of other countries.

More than 30 Stinger missiles were successfully test fired against aerial and fixed targets at the Eglin Air Force Base range in March 2014.

The shoulder-fired, fire-and-forget Stinger SAM system employs rolling airframe canard control concept. It is controlled by two operators and can operate under all weather conditions.

The front section of the missile is equipped with a two-colour rosette scanning seeker with infrared (IR) / ultraviolet (UV) detectors to acquire the targets. The IR detector is used to sense the hot exhaust gases, while the UV detector is used to track radiation.

The information acquired by the seeker is sent to the passive, highly accurate homing guidance and control system. The missile is guided by proportional navigation.

The Stinger missile system is equipped with a conventional high-explosive, penetrating hit-to-kill warhead projectile supplied by American Ordnance. It consists of an impact fuse assembly, a self-destruct timer and up to 1lb of high explosives encased in a pyrophoric titanium cylinder. The lethal warhead weighs 3kg.

The Stinger missile is propelled by a two-stage boost / sustainer solid propellant flight motor, which provides a speed of more than Mach 2. The motor is powered by improved composite solid propellants. The propulsion system ensures the missile to operate at a maximum altitude of approximately 10,000ft and provides a maximum range of five miles.

The Stinger weapon system was developed to replace Redeye MANPADS. The advanced development of the Redeye II missile system began in 1967 and the Redeye II was renamed as Stinger in March 1972. General Dynamics was awarded an engineering development contract for the Stinger system in June 1972 and engineering tests began in March 1973. The guided flight test programme began in November 1973. The first missile in the design flight test series was test-fired against a QT-33 target in July 1975.

The Stinger production qualification test-government (PQT-G) began in April 1976 and was completed in July 1977. The US and Germany conducted joint Stinger acquisition and tracking tests in 1976. Germany selected the system in January 1979 and signed three foreign military sales (FMS) agreements worth $1.8m for the missile system’s test hardware, technical training and technical assistance in 1980. The missile system achieved initial operational capability (IOC) in February 1981.

General Dynamics received a modification request from MICOM to continue the advanced development of Stinger POST, in July 1976. The modification included redesign of the missile’s seeker head. The Stinger-POST programme entered into engineering development phase in June 1977. General Dynamics received the initial production contract in April 1978.

In April 1983, the US and the Federal Republic of Germany signed a memorandum of understanding for dual production of the basic Stinger and Stinger-POST weapon systems. MICOM awarded a low-rate initial production transition contract to General Dynamics for Stinger-POST in September 1983.

In September 1984, the US Congress approved funds for the Stinger-RMP engineering development programme and issued a contract to General Dynamics. In November 1985, MICOM awarded a modification contract to General Dynamics for the Stinger missile hardware in RMP configuration instead of Stinger-POST hardware. The initial five Stinger-POST production missiles were delivered in September 1986, while the Stinger-RMP missiles were delivered in July 1989.

A development contract for the latest version, Stinger Block I was awarded in April 1992 and the upgrades included software and hardware changes to improve countermeasures capability of the missile system. The Bock I variant entered into production in 1996.

In June 2002, Raytheon secured a $35m firm-fixed price contract for production and delivery of more than 370 missiles in Block I and RMP configurations. More than 44,000 Stinger missiles were produced by 1997.

The US Army Aviation and Missile Command awarded a $16.4m firm fixed-price contract to Raytheon for production of 139 Stinger Block I missile systems in June 2003.