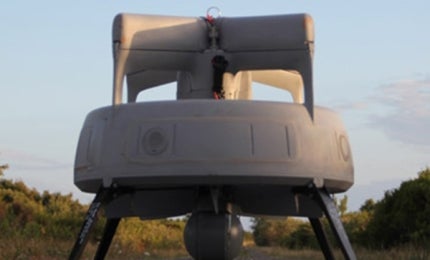 Spyball-B is a micro-electrical rotary wing unmanned aerial system (UAS) designed and developed by Selex ES, for use by the Italian Armed Forces and Nato Allied Forces.

"The UAS passed factory acceptance tests in July 2014 and is being delivered to the Italian Army as part of the Forza NEC modernisation programme."

The UAS passed factory acceptance tests in July 2014 and is being delivered to the Italian Army as part of the Forza NEC modernisation programme.

The Spyball-B unmanned aerial system features a lightweight, ducted fan design and offers quiet operation. It has vertical take-off and landing (VTOL) capability and can carry out intelligence missions in hover and stare mode. The system is compliant with the latest Nato standards.

The UAS has a height of 0.55m, a diameter of 0.48m and a maximum take-off weight of 2kg. It can be carried in backpacks and operated by a single person. It can be flown in automatic or semi-automatic modes.

The UAS can be fitted with one infra-red (IR)/thermal pan and tilt gimbal module and two electro-optical (EO) day / night pan and tilt gimbals. The standard stabilised EO and IR camera payload systems are used to perform visual tracking, target locking, and mosaicing functions. The EO camera has a horizontal field of view (HFOV) of 46° and offers a resolution of 640 x 480. It generates PAL standard video output.

The IR camera system has an HFOV of 40° and can capture imagery of 320 x 240 resolution. It uses PAL (B) standard signal for video transmission. The payload systems on Spyball-B provide improved surveillance during day and night operations.

The UAS is equipped with an automatic obstacle avoidance system, which allows for safe operations in urban areas. It can be optionally fitted with a laser range finder and a P/Y GPS with Selective Availability Anti-spoofing Module (SAASM).

Spyball-B and its payloads are controlled from a man portable ground command & control station (GCCS), which features both commercial and custom software. The ground station weighs 7kg and operates for up to two hours.

The ground segment consists of a ground data terminal (GDT), human machine interface (HMI), single monitor, 7in touchscreen and flight controls. It provides mission planning, navigation data, map database management, and payload video recording and processing. The GCCS performs command and control of the UAS via a telemetry link and receives payload video stream via a video link. It also stores geo-referenced data and videos received from the drone. The UAS can be effectively flown up to a line of sight range of 5km.

The Spyball-B UAS is powered by an electrical brushless lithium polymer (LIPO) rechargeable battery pack, which enables it to fly at a speed of 28.8km/h. The UAS has an endurance of more than 25min. It operates at altitudes from 20m to 100m above ground level. Its maximum operating ceiling above sea level is 2,100m.

The air vehicle can withstand operating and storage temperatures ranging from -32°C to 49°C.