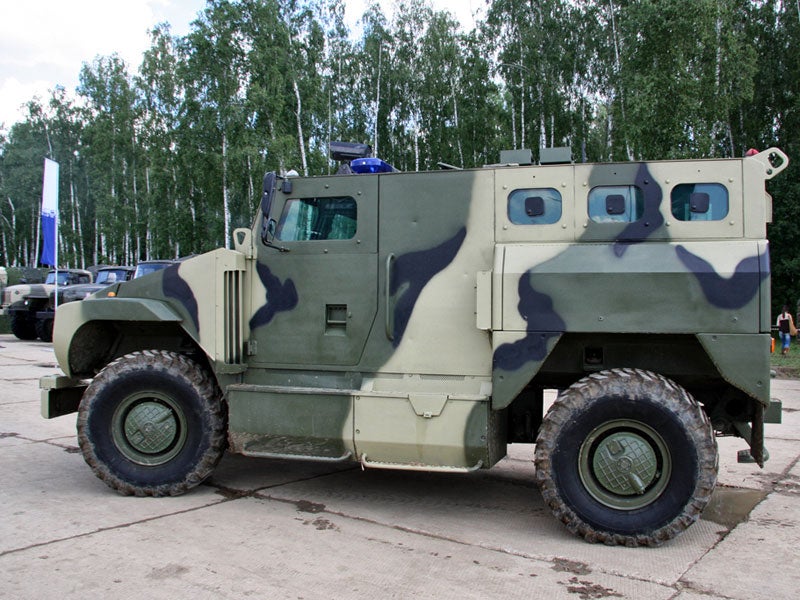 SPM-3 Medved 4×4 mine-protected armoured vehicle is manufactured by Military Industrial Company (VPK) for use by the armed and internal security forces of Russia. The vehicle was unveiled during the Interpolitex 2001 homeland security exhibition held in Moscow, Russia.

SPM-3 Medved can be configured to a number of roles, including armoured personnel carrier, internal security, command, reconnaissance, and ambulance. The special armoured police vehicle variants are in service with the Interior Ministry of Russia.

Orders and deliveries of the 4×4 armoured vehicle

The Military Industrial Company received an order from the Russian Ministry of Internal Affairs for an undisclosed number of SPM-3 police vehicles in February. Simultaneous deliveries are scheduled to commence in 2017.

The police variant was also selected by the National Guard of Uruguay.

With a payload capacity of 1,200kg, the vehicle carries up to ten personnel, including two crew members. The crew cabin is fitted with a two-piece ballistic windshield and has a door on either side.

Two wide opening doors with small windows are provided at the rear, allowing for easy access to the troop compartment. The vehicle has armour protection on either side with three small bullet-proof windows with firing ports.

The troop compartment can be equipped with two roof hatches to facilitate emergency exit for the occupants.

The vehicle can be optionally fitted with equipment such as a fire control system, night vision system, nuclear, biological and chemical (NBC) protective equipment, radio communications, and LED lights.

The mine-resistant ambush protected vehicle can be equipped with a ring-mounted turret or a remote-controlled weapons system on the top at the front part of the crew cabin. It can be armed with either a Kord 12.7mm heavy machine gun or a 7.62mm Pecheneg general-purpose machine gun.

The SPM-3 Medved armoured vehicle can withstand mine explosions of 7kg of trinitrotoluene TNT detonated under any wheel or under the capsule. Fitted with Class 6a armour, the vehicle offers ballistic protection against armour-piercing bullets fired by sniper rifles under the GOST governmental standard.

“SPM-3 Medved can be configured to a number of roles, including armoured personnel carrier, internal security, command, reconnaissance, and ambulance.”

The adjustable and suspended troop seats ensure safety of the troops in hostile environments, while the V hull with armour-clad further improves the survivability of the occupants.

A front-mounted YaMZ-7601 diesel engine rated at 310hp provides high off-road mobility. An independent torsion bar-type suspension with hydraulic shock absorbers is installed on all wheels for a smooth drive.

The vehicle is additionally equipped with reduction gear assembly, which further improves the ride quality.

SPM-3 Medved has a ground clearance of 500mm and is capable of travelling up to 1,400km. It can attain a maximum speed of 110km/h on road, whereas its maximum cross-country speed is 50km/h.

RECADATA
RECADATA is one of the professional SSD manufacturers, dedicated to...
SUBSCRIBED