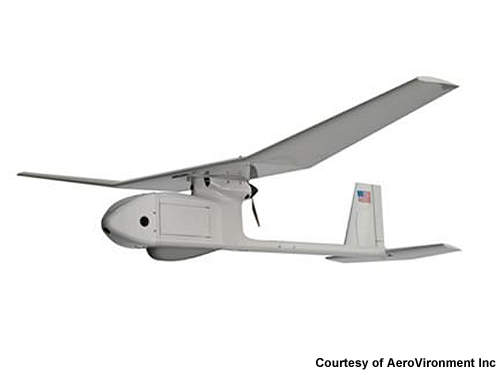 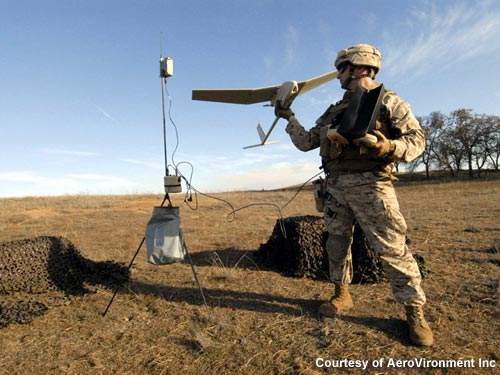 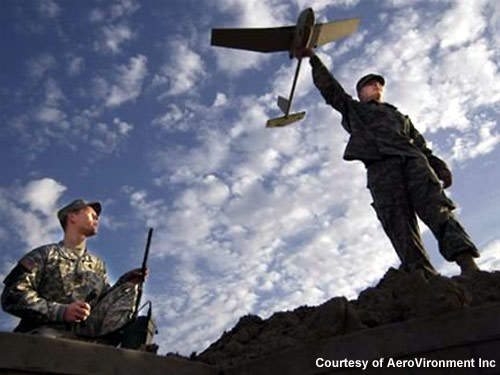 The RQ-11A Raven UAV weighs about 1.9kg (4.2lb). It has a flight endurance of 80 minutes and an effective operational radius of about 10km (6.2 miles). Credit: AeroVironment Inc. 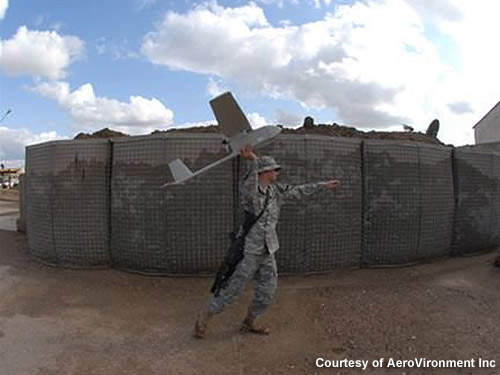 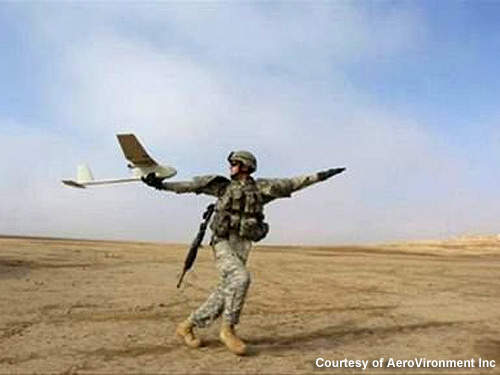 Launched in just minutes, by hand, into the air like a model airplane, the Raven lands itself by auto-piloting to a near hover. 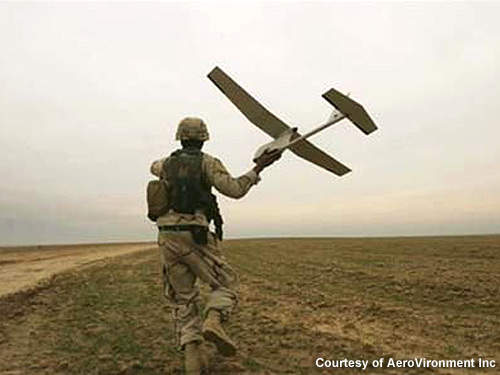 The RQ-11 Raven is a lightweight unmanned aircraft system (UAS) designed for rapid deployment and high-mobility in military and commercial operations.

The Raven meets army requirements for low-altitude reconnaissance, surveillance and target acquisition. It can be operated manually or programmed for autonomous operation, utilising the system’s advanced avionics and GPS navigation.

In October 2013, AeroVironment secured a $20m order from the US Army to provide Mantis i23 gimbaled sensor payloads to upgrade the RQ-11B Raven. An order for the Raven spare parts was placed by the US Army in September 2014.

In October 2015, the US Army awarded an $18.5m foreign military sales (FMS) contract to AeroVironment for the supply of RQ-11B unmanned aircraft systems, spare parts and logistic services to seven partner countries.

AeroVironment received a $6.4m contract from an existing defence customer from Southeast Asia to deliver additional Raven UAVs in September 2019. Deliveries are scheduled to conclude by the end of 2020.

The US Army required live-coverage capability to enable the troops to get real-time, up-to-date and over-the-horizon views in trouble areas. The army bought four AeroVironment FQM-151 Pointer UAVs in 1999 for military operations in urban terrain (MOUT) and the advanced concept technology demonstration (ACTD) programme.

Subsequently, AeroVironment developed a smaller air vehicle called Raven. At half the size of Pointer, it was named the ‘Flashlight’ SUAV (small UAV). It flew for the first time in October 2001.

The Flashlight SUAV was developed into Raven in 2002. This was done as part of the army’s Pathfinder ACTD programme. As it was handbuilt, mass production was not possible. Block I of Raven’s modified version, delivered in May 2003, became the first LRIP (low-rate initial production) version.

Block I’s shortcomings, such as difficult launch procedure and insufficient flight stability, were corrected in block II, which was first delivered to the army in September 2003. The batch II version was tested in Afghanistan. Subsequently, US Special Operations Command ordered a batch of 179 Raven systems with three UAVs each. Batch II was officially designated as an RQ-11A Raven air vehicle.

In June 2019, the US Army signed a $55m contract with AeroVironment to modify the radio frequency of its existing Raven B unmanned vehicles fleet.

RQ-11 UAVs are manufactured in two variants of RQ-11A and RQ-11B, which are designed and manufactured by AeroVironment

The RQ-11 Raven B system is an enhanced version of the battle-proven Raven A. It is a lightweight system designed for rapid deployment and high mobility for both military and commercial applications. The Raven B is the most advanced small unmanned aircraft systems (SUAS) deployed with the US armed forces.

It can deliver real-time colour or infra-red imagery to ground control unit (GCU) and remote viewing stations, as well as IR laser illumination of ground targets.

The RQ-11 Raven allows military units to conduct intelligence, surveillance, and reconnaissance (ISR) over danger zones without committing soldiers. It allows the task force to monitor an area with a less obtrusive presence and live video capabilities during day and night.

Launched in just minutes, by hand, into the air like a model aeroplane, the Raven lands itself by auto-piloting to a near hover. It does not require carefully prepared landing strips. Requiring no elaborate support facilities, the Raven ideally suits forward-deployed units. The automated features and GPS technology make it simple to operate, requiring no specialised skills or in-depth flight training.

It delivers real-time colour or infra-red imagery to the ground control and remote viewing stations via three different cameras attached to the nose of the plane.

One of these is an electro-optical camera placed either on the nose or side, while the second is an infra-red camera in the nose. The third is an IR camera located on the side.

Because of the size of the technology, the IR camera is fairly large and does not have a zoom so it cannot lock onto a target. However, it does have high enough resolution to show whether someone is carrying a weapon.

The US Army, Air Force, Marine Corps and Special Operations Command are the primary users of Raven B.

“The RQ-11 Raven is a lightweight unmanned aircraft system (UAS). It is designed for rapid deployment and high mobility.”

AeroVironment won the small unmanned aerial vehicles (SUAV) programme competition organised by the US Army in October 2005. The winning contract included a supply of 2,182 Raven systems along with the ground control system and three air vehicles.

RQ 11B Raven’s full-rate production for the US Army is scheduled up to 2015. There would be upgrades providing continuous system improvements over the life of the programme.

US allies such as Australia, Italy, Denmark, the UK and Spain have also begun acquiring the Raven. The UK has been using Raven equipment in Iraq.

The Royal Danish Army acquired 12 Raven systems in September 2007. Three systems are being used by the Huntsmen Corps. The others are deployed with the Artillery Training Centre. Around 72 Raven B systems have been acquired by the Netherlands Ministry of Defence at a cost of $23.74m.

AeroVironment received a $3.6m contract from the US Marine Corps in March 2012 to deliver RQ-11B Raven SUAS and initial spares packages.

The US Army placed a $3.4m FMS contract with AeroVironment for the delivery of RQ-11B Raven UAVs to the Spanish Ministry of Defence in August 2015.

The GCU is a compact and lightweight system, which displays real-time videos and images captured by the vehicle’s payload cameras.

The processing, retrieving and storing of the real-time data provided by the UAV is carried out at the GCU. It can also playback videos for target evaluation and alleviate retransmission of videos and meta data to the operations network.

GCU can be operated as a remote video terminal (RVT) when implanted at remote location. It also allows the command centres to view and analyse the data. The GCU can be easily assembled or disassembled in two minutes.

The range and service ceiling of the aircraft are 10km and 4,500m respectively, while its maximum endurance is 90 minutes.

Tactical Infantry Transport and Utility System or TITUS is a new modular armoured wheeled vehicle unveiled by Nexter Systems at the Defence Security and Equipment International exhibition (DSEI) in September 2013.