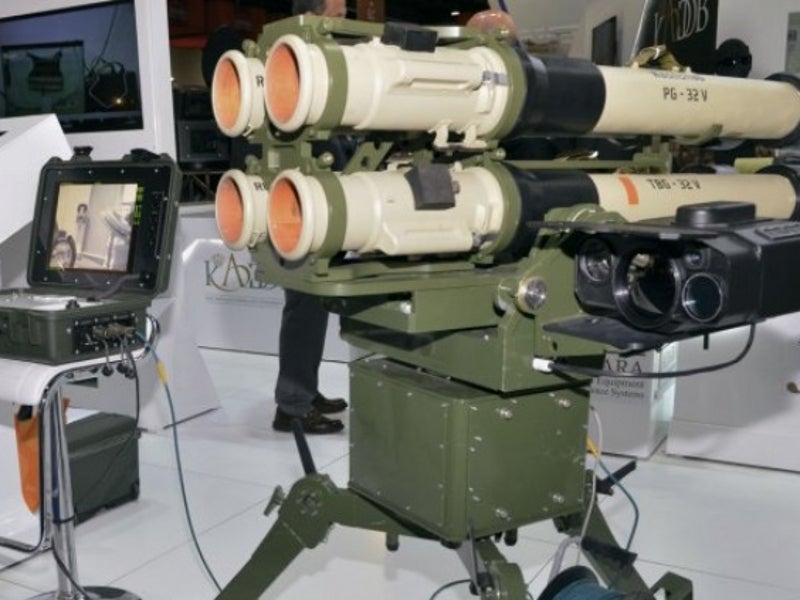 The anti-armour weapon system is intended to defeat a variety of targets in the battlefield such as heavily armoured tanks, light armoured vehicles, bunkers, fortifications, buildings, equipment and military forces in open and closed areas.

The RPG-32 Hashim was designed and developed by Bazalt for the Jordanian Armed Forces in 2005. A mock-up was demonstrated during the Special Forces Operations Exhibition (SOFEX) held in Amman, Jordan, in 2006.

Licensed production of the RPG-32 rocket launchers using Russian technology began at JADARA manufacturing facility near Amman in the middle of 2013. The weapons are now in service with the Royal Jordanian Army and have also been ordered by the United Arab Emirates.

Two new versions of the Nash-Shab quadruple launchers, named Quad-1 and Quad-2, were introduced during the SOFEX 2016 exhibition.

It is equipped with ammunition of 72.5mm or 105mm calibre and electro-optical sighting systems. It can be launched and operated from semi-closed firing points or restricted areas.

The weapon is man-portable and is fired by one soldier in standing, kneeling and lying in the prone positions. The man-portable variant is launched using a 6G40 hand-held launching device that is 375mm-long and weighs 3kg. With a rate of fire of 3 revolutions per minute, the launcher unit can fire a maximum of 200 rounds.

The RPG-32 is also suitable for launch by a remotely operated launcher. Additionally, the weapon is provided with IRG-32V sub-calibre training rounds and a training simulator.

The RPG-32 smooth bore recoilless weapon can be provided with two types of warheads, the TBG-32 multi-purpose thermobaric and ATG-32 anti-tank, high-explosive tandem-shaped charge. Each rocket is 1m-long and weighs 7.5kg.

The 105mm calibre tandem HEAT warhead has the ability to penetrate through 650mm of steel armour behind reactive protection, while the 72.5mm thermobaric warhead offers high lethality against light armoured targets, military fortifications and buildings.

The RPG-32 anti-tank weapon system can be equipped with different optical devices such as GS-1DN (1P81) standard optical sight with NV/A-2 night vision unit. With an angular field of view of 12°, the GS-1DN sight has an aiming distance ranging from 50m to 700m during the day and 50m to 350m at night.

The weapon can be optionally equipped with new GS-2R day and night sight with a laser range finder and a NV/A-1 night vision sight.

The GS-2R sight has an angular field of view of 16.5° and can operate in temperatures ranging between -40°C and 50°C.

The Nash-Shab Quad ground-based launcher can carry up to four RPG-32 anti-armour weapons in 2×2 configuration. It is fitted with side-mounted sensor package including a television camera and a thermal imager, which are used for detecting and tracking objects with infrared radiation.

“The anti-armour weapon system is intended to defeat a variety of targets in the battlefield such as heavily armoured tanks, light armoured vehicles, bunkers, fortifications, buildings, equipment and military forces in open and closed areas.”

Sensor package for the new Quad-1 launcher version is placed in the centre, allowing better target detection and tracking.

The Nash-Shab Quad-2 launcher is also equipped with four RPG-32 weapons in 4×1 configuration. It can be mounted on armoured fighting vehicles too.

The Nash-Shab RPG-32 weapons, mounted on the Quad and Quad-1 launchers, are operated from a control station at a safe distance of 300m, using a wire. The vehicle-mounted Quad-2 launcher is operated using a control unit located inside the vehicle.

The RPG-32 weapon offers effective firing range between 200m and 700m and is immune to electronic countermeasures and can self-destruct against the target.