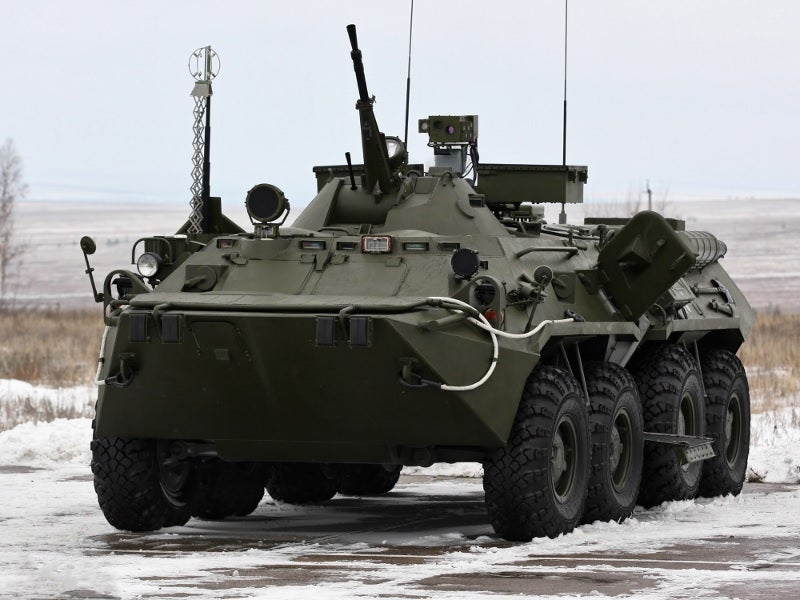 The RKhM-6 Povozka is a chemical, biological, radiological and nuclear (CBRN) reconnaissance vehicle produced by Arzamas Machinery Plant of Military Industrial Company (VPK), for the Russian Army. It is an advanced variant of the RKhM-4-01 CBRN vehicle.

Arzamas Machinery Plant delivered four RKhM-6 vehicles to the NBC protection unit of a Russian military base in Armenia, in early-2016.

“The 8×8 CBRN vehicle is designed to conduct chemical, radiological, biological and nuclear reconnaissance missions for CBRN reconnaissance elements of the Russian Armed Forces.”

The NBC Brigade of the Western Military District in the Kursk region is expected to receive 20 RKhM-6 CBRN reconnaissance vehicles by the end of 2016.

The vehicle is based on the hull of BTR-80 armoured personnel carrier (APC). The conventional layout accommodates the driver’s compartment at forward hull, NBC laboratory in the middle and engine at the rear.

The RKhM-6 is equipped with more advanced NBC laboratory. The fully automated system is controlled by single personnel and enables the automatic detection of chemical and radioactive substances, with alarms ringing inside the vehicle if any such contamination is found.

The sensors aboard the vehicle can detect any type of radioactive contamination from inside the vehicle, and the crew can test the samples from within the vehicle.

The vehicle lacks special suits for dismounting troops in a radiation environment, but carries three sets of MOPP suits and filters. The biological sensors on the vehicle can detect biological molecules such as viruses, while the chemical detection optical devices use the onboard computer for analysis.

The vehicle can detect vapours and aerosols of toxic and hazardous substances in a contaminated environment of 10m² a minute. The vehicle runs at a speed of 20km/h-50km/h in accordance with the level and complexity of contamination.

The RKhM-6 is equipped with the battlefield management systems (BMS), and Perunit-V satellite navigation system based on GLONASS. The advanced meteorological suite provides coverage across 4km² of area or accurate direction up to 6km. It measures wind speed and direction, air samples, weather conditions, rain and snow.

Armament and self-protection of RKhM-6

The RKhM-6 is armed with a turret-mounted 14.5mm heavy machine gun and a coaxial 7.62mm machine gun. The vehicle features automatic smoke grenade launchers and also carries smoke grenades inside the hull for reloading.

It features spaced and heavier armour at the forward hull, while the sides and turret are hinged with aluminium and steel plates. The vehicle also integrates a reinforced roof and blast-resistant floor for protection against mine explosions.

The vehicle is powered by a KamAZ turbo-charged diesel engine mated to an automatic transmission. The engine develops a maximum power output of 300hp.

The vehicle is equipped with a central tyre inflation system and run-flat tyres for high mobility over different terrains. It has a maximum road speed of 80km/h and can attain a maximum speed of 10km/h in water, whereas the maximum endurance is 600km.