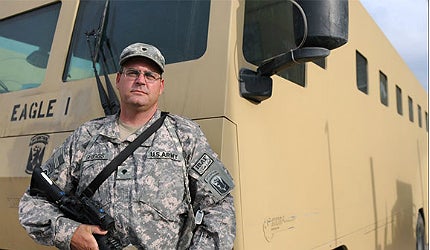 RhinoRUNNER is used for the transportation of civilian contractors, armed forces, VIPs and prisoners prosecuted by the Iraqi Special Tribunal. It is regularly used for carrying civilians and press personnel between Baghdad International Airport and the Green Zone in Baghdad. The US Army operating in Afghanistan and Iraq uses the RhinoRUNNER for the troop transportation between bases.

The US Secretary of Defence Donald Rumsfeld, General Richard Myers and Matthew Roloff are well-known VIPs who have used the RhinoRUNNER bus. The bus was also used to move Saddam Hussein for prosecution by the Iraqi Special Tribunal.

The RhinoRUNNER buses frequently run on Route Irish, which is an extremely dangerous roadway between the Green Zone and Baghdad International Airport. A convoy of RhinoRUNNER buses was attacked in November 2004 by a suicide bomber driving a vehicle loaded with 250lb of explosives. The explosion occurred between the first and second buses, near the second bus. The 17 passengers in the bus and the driver aboard the second bus escaped without injuries.

"The US Army operating in Afghanistan and Iraq uses the RhinoRUNNER for the troop transportation between bases."

Armour Group delivered more than 50 RhinoRUNNER buses to the US Army. In March 2011, the US Army placed a contract with Armour Group to provide maintenance and support services for the RhinoRUNNER fleet at Camp Phoenix in Afghanistan.

In February 2011, the Pakistan Ministry of Health placed an order for 20 RhinoMEDIC mobile hospitals.

The RhinoMEDIC is based on the RhinoRUNNER bus. The medical facilities aboard the bus were designed by Advanced Mobile Hospital Systems (AMoHS).

RhinoRUNNER was designed to deliver maximum protection using components of lowest possible weight and cost. The bus is made in various sizes with different purposes. The armoured hull is based on either a 4×4 or 6×6 all-wheel drive chassis. The bus integrates common off-the-shelf components to achieve reductions in lifecycle support costs.

The bus can be configured to house 19 to 40 passengers or a mobile command and control centre, or a mobile hospital. Passengers can enter and exit through side and back doors, as well as through a roof hatch.

Gun ports on the vehicle allow the troops to fire their individual weapons from inside the vehicle. The bus is also equipped with dual air conditioning system and run-flat tyres.

Self-protection and engine of the armoured bus

"Armour Group delivered more than 50 RhinoRUNNER buses to the US Army."

Bullet-proof glass and composite armour on the sides, front, back, roof and floor of the vehicle offer protection up to Type IV (NIJ standard). The special composite bullet-proof armour is made of lightweight materials.

RhinoRUNNER is also fitted with standard RhinoGLASS which offers superior protection. It was tested and certified by H.P. White Laboratories. The one-way return fire glass prevents the penetration of bullets from outside, while allowing the passage of bullets fired by the occupants from inside the vehicle. It offers protection of up to NIJ Level IV and can withstand extreme combat conditions of the Middle Eastern theatre.