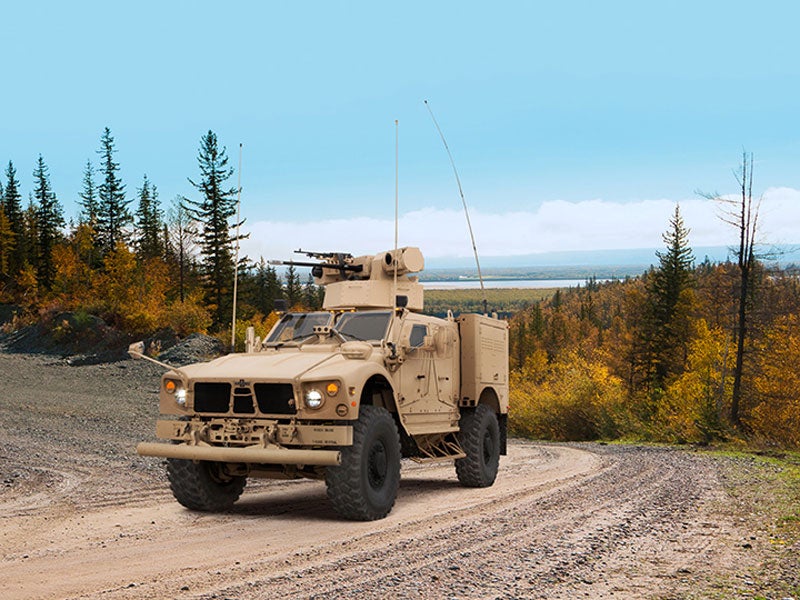 The mine-resistant ambush-protected (MRAP), all-terrain vehicle (M-ATV) Assault is a new member of the combat-proven M-ATV family of vehicles produced by Oshkosh Defense to meet the challenging requirements of the armed forces in hostile environments.

The M-ATV was recently displayed at the IDEX Conference 2017 held in Abu Dhabi in February.

The M-ATV Assault vehicle is built based on the medium tactical vehicle replacement (MTVR) chassis. It features an armoured capsule made of bolt-on armour materials. Its hull offers reduced visual, thermal and electromagnetic signatures. The extended wheelbase results in large interior space.

The centre seat in the second row can be converted into a gunner stand. The seating is designed to ensure easy ingress and egress, while the rear wall and roof hatches enable rapid deployment of troops on the battlefield.

The M-ATV Assault is mounted with a Moog reconfigurable integrated-weapons platform (RIwP), which is armed with an Orbital ATK M230LF 30mm lightweight automatic chain gun, an M249 machine gun, a Javelin missile, and a long-range target acquisition sensor suite.

“The M-ATV was recently displayed at the IDEX Conference 2017 held in Abu Dhabi in February.”

The dual-axis stabilised system is guided by a single or dual-axis independently stabilised sight system to increase the first round hit probability on the move. The universal missile platform also allows for firing of a wide range of existing ground platform missiles of the US Army.

The RIwP enables the gunner and commander to switch between direct fire, missile, sight and non-lethal configurations to counter asymmetric threats in the battlefield. It also enhances the situational awareness with a gunner’s hatch and ensures the weapon reload under armour protection.

The vehicle can be optionally fitted with Oshkosh gunner protection kit (GPK). It is also equipped with automatic fire-extinguishing systems for increased protection.

The M-ATV Assault is powered by a Caterpillar C7, 7.2L engine with a rated power output of 276kW. The engine is coupled to an Allison 3500 SP six-speed automatic transmission. The drivetrain includes a two-speed, full-time four-wheel drive with locking differential.

The central tyre inflation system (CTIS) further enhances the mobility across different terrains. The two-channel system comes with four terrain settings with integrated driveline lock-up control. The vehicle has a curb weight of 16,700kg and can carry a maximum payload of 2,000kg.