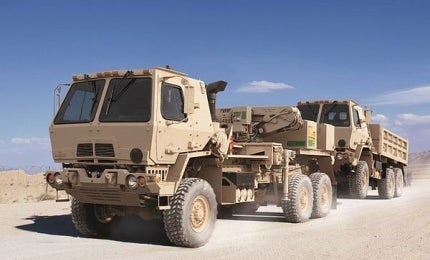 Oshkosh Defence developed the Family of Medium Tactical Vehicles (FMTV) to meet a range of mission needs of the US Army combat support initiative.

The FMTV can be used to transport troops and supplies, and recover disabled vehicles and weapon systems, as well as for line-haul operations.

Oshkosh Defence has delivered approximately 35,700 FMTV trucks and trailers to the US Army and National Guard since 2010.

The cab, which accommodates three crew members, is equipped with an ergonomically adjustable driver seat and steering wheel.

“Oshkosh Defense has delivered approximately 35,700 FMTV trucks and trailers to the US Army and National Guard since 2010.”

The hydraulically operated FMTV 5t Wrecker variant features lift and tow capability for front and rear recovery of distressed medium and light tactical vehicles. It has a length of 9.62m, width of 2.43m, height of 2.83m, and wheel base of 5.30m / 4.10m. Its kerb weight is 18,167kg and towed load capacity is 24,948kg, whereas the vertical lift capacity is 9,752kg.

The Wrecker is equipped with a crane and winch retrieval system, single centre-mounted, hydraulic-deployed winch anchor and a multi-user adapter. The vehicle can perform flat towing without any preparation.

The reliable, easily manoeuvrable Cargo 4×4 / 6×6 variant is intended for military personnel and cargo transportation, and is air transportable by a C-130 military transport aircraft. The FMTV 10t Dump truck variant can be used in construction missions to carry and dump materials.

The FMTV cab is compliant with the US Army’s Long-Term Armor Strategy (LTAS) and offers enhanced protection and comfort for the crew members. It can be optionally equipped with additional armour kits.

Engine and mobility of Oshkosh FMTV

The FMTV Wrecker has a maximum speed of 88km/h and a range of more than 483km. It can negotiate grades of 60% and side slopes of 30%. Its approach and departure angles are 40° and 20° respectively.

In May 2009, Oshkosh Defense submitted its proposal for the FMTV re-buy programme, a five-year, multibillion dollar contract award, for the production of 23,000 vehicles and trailers.

Oshkosh Defence delivered the first truck to the Wisconsin National Guard’s 1157th Transportation Company in January 2011. The US Army TACOM LCMC awarded two separate orders in 2011 for a total of 7,400 vehicles.

In July 2015, the US Army TACOM LCMC awarded a $184m order to Oshkosh Defence to produce 698 FMTV trucks for the US Army. Identical deliveries began in 2016.

In September 2016, the US Army awarded a $409m contract to Oshkosh Defence to produce 1,661 FMTVs. The deliveries of the vehicles will continue through 2018.

The US Army placed a $260.1m contract modification for an additional 1,065 FMTV trucks, in September 2017. The deliveries are expected to conclude by 2019.