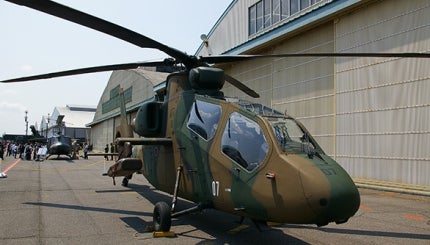 The OH-1 is a light observation helicopter produced by Kawasaki Heavy Industries for the Japan Ground Self-Defence Force (JGSDF). The helicopter is a successor to the OH-6D helicopter of the JGSDF. The OH-1 is also referred to as the Ninja.

The OH-1 is Japan’s first indigenously built helicopter. The first prototype OH-1 completed its maiden flight in August 1996. Kawasaki handed over a total of four prototypes to the Japan Ministry of Defence by August 1997. The first production OH-1 was delivered to the JGSDF in January 2000.

The JGSDF had planned to acquire 180 to 200 OH-1 helicopters, but the purchases were affected by defence budget cuts. About 34 OH-1s had entered service with the JGSDF by March 2012.

The JGSDF initiated its plans to acquire a new indigenous observation helicopter to replace its Kawasaki license-built OH-6Ds in the 1980s, which became known as the OH-X programme. Design proposals for the OH-X programme were presented by Kawasaki, Fuji and Mitsubishi. Kawasaki’s design was selected on 18 September 1992.

The Japan Ministry of Defence allocated $22.5m in FY92 for the basic design phase of a new helicopter under the OH-X programme. The request for proposals (RFPs) was issued in April 1992. Kawasaki was preferred as the prime contractor (60% of programme) in September 1992, along with Fuji (20%) and Mitsubishi (20%) as sub-contractors.

The preliminary design phase commenced in October 1992 by the Observation Helicopter Engineering Team (OHCET) established by three companies. The helicopter made its public debut in September 1994. It received the designation of OH-1 in late 1996.

The OH-1 incorporates a slender fuselage made of composite materials. The engines are mounted either side of the fuselage, well behind the tandem cockpits. The composite joint-free rotor hub includes a four-bladed main rotor made of composite fibreglass. The tail rotor is shrouded in Fenestron assembly to reduce noise and improve safety.

The helicopter accommodates two crew in tandem configuration. The front and rear cockpits house a pilot and a weapons officer/observer. Access is provided through upward-opening on the starboard side. The bullet-proof glass on the cockpit provides all-round visibility for the crew. The cockpits are equipped with armour protection and shock-absorbing seats to enhance crew safety.

The wing stub assemblies on either side of the fuselage house four hard-points carrying external stores of 132kg. The hard-points can be armed with a wide range of weapons including a combination of missiles, rocket pods, cannon pods and gun pods. The inner pylons can carry external fuel tanks for extended range.

The non-retractable landing gear of OH-1 includes two main landing gear units extending from forward fuselage and one unit under tail rotor assembly. Each unit is fitted with a single wheel.

Mi-171Sh Combat-Transport Helicopter, Russia The Mi-171Sh helicopter is being produced by the Ulan-Ude Aviation Plant (UUAP), part of Russian Helicopters.