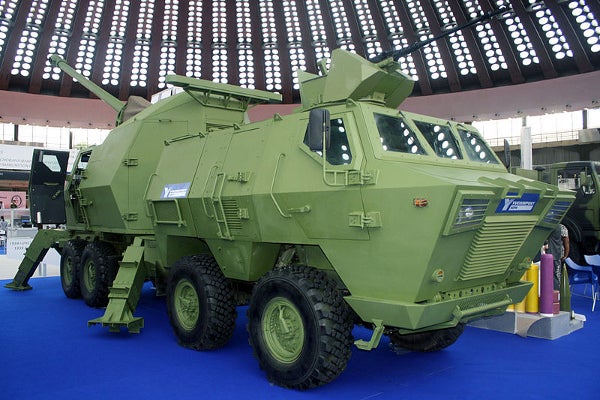 The NORA B-52 is a 155mm, 52-calibre self-propelled gun-howitzer produced by Yugoimport-SDPR primarily for the Serbian Army.

NORA B-52 design and features

The FAP 2832 truck is fitted with a forward-tilting cab with a door each side. The cab accommodates some of the self-propelled gun crew, while a fully enclosed pod placed behind the cab carries the remaining crew.

The howitzer has high fire power and cross-country mobility. It offers both direct and indirect fire support and enables high and low angle fire without altering its firing position.

AS90 Braveheart is a 155mm self-propelled howitzer which entered service with the British Army in 1992.

Variants of NORA B-52 howitzer

The NORA B-52 is produced in a number of variants with different chassis, turret and armour configurations.

NORA B-52 K0 is the first variant of the NORA B-52 howitzer. The variant was exhibited at the international weaponry and military equipment fair PARTNER in 2007 and 2009 in Serbia.

The NORA B-52 K1 variant, fitted with an independent automatic navigation system and a semi-open turret, is supported by an automatic fire control system. It was displayed during PARTNER 2011.

NORA B-52 M03, the third variant, is equipped with a semi-open turret and full armour protection. NORA B-52-KE is a lighter version with a combat weight of 27.4t. It is also fitted with a semi open turret.

NORA B-52 K-I, an improved version of the NORA B-52 KE, is fitted with Nuclear, Biological and Chemical (NBC) protection equipment and offers complete ballistic protection for the crew against small arms fire and artillery shell splinters. The howitzer can withstand an explosion of 6kg trinitrotoluene (TNT) under the hull.

The K-I variant and the latest version NORA B-52 K2 were displayed during PARTNER 2013.

Armament of NORA B-52 self-propelled howitzer

The howitzer integrates a traversable turret mounted with a 155mm 52-calibre gun as primary armament. The ammunition stowage located at the rear of the enclosed pod can load up to 36 rounds. The automatic loading system holds 12 ready-to-fire projectiles and the remaining 24 are placed in the magazine for reload. It can fire all 155mm ammunition to Nato standard.

The self-propelled howitzer has a firing rate of six rounds per minute and muzzle velocity of 925m/s. Its main gun barrel incorporates a high-efficiency muzzle brake and a horizontal sliding wedge breech block. The gun can fire an ordinary projectile to a maximum range of 20km and Extended Range Full-Bore-Base Bleed (ERFB-BB) projectile up to a distance of 41km.

"The howitzer is fitted with an advanced command-information system."

The howitzer is fitted with an advanced command-information system. The control system of the main gun comprises electro-hydraulic elevating and traversing drives with manual control. A hydraulically powered flick rammer drives the ammunition into the barrel. The projectile is fired with an angle of elevation between -3° and +51° at a speed of 20m/s, while its angle of traverse is 60° at 100m/s.

The turret is optionally equipped with a 12.7mm machine gun or a 12.7mm remotely controlled weapon station (RCWS) serving as secondary armament in close combat operations.

The FAP 2832 truck is powered by a Mercedes-Benz OM 501 LA diesel engine rated at 360hp. The engine drives four crankshafts, while two front steering shafts connect the steering wheel with the steering gear.

The gradient and side slopes of the NORA-B/52 howitzer are 60% and 30% respectively. The vehicle can traverse a vertical obstacle of 0.6m and a trench of 1.8m. The fording depth of the vehicle is about 1.2m. The vehicle can accomplish a maximum speed of 90km/h on road and a range of about 1,000km.