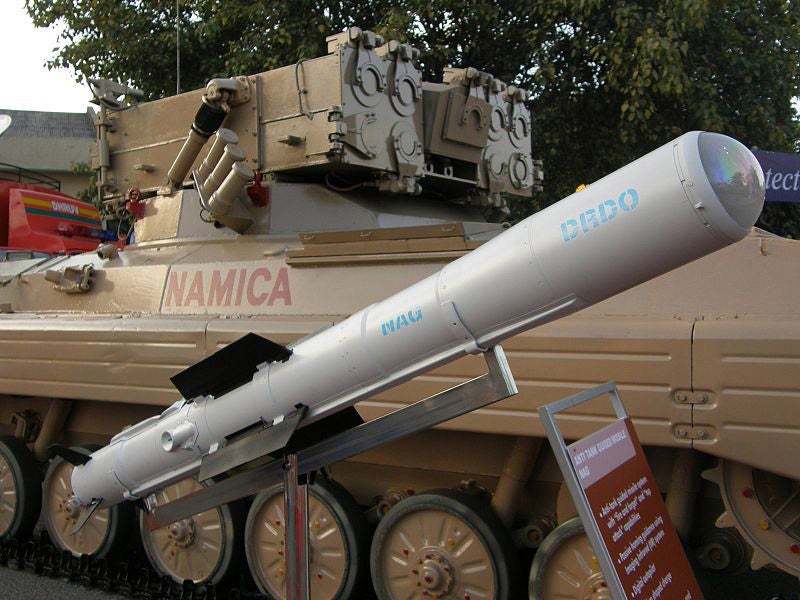 Nag is a third-generation, fire-and-forget, anti-tank guided missile developed by India’s state-owned Defence Research and Development Organisation (DRDO) to support both mechanised infantry and airborne forces of the Indian Army.

Nag can be launched from land and air-based platforms. The land version is currently available for integration on the Nag missile carrier (NAMICA), which is derived from a BMP-2 tracked infantry combat vehicle.

The Nag missile was indigenously developed under the Indian Ministry of Defence’s integrated guided missile development programme (IGMDP), which also involved the development of four other missiles that are Agni, Akash, Trishul and Prithvi.

The first test of Nag was conducted in November 1990. A test launch of the missile from a tube in programmed control mode was performed at the Interim Test Range, Balasore, Odisha in September 2001.

User trials of the Nag anti-tank missile against static and moving targets were conducted in 2007 and 2008 respectively, while the development tests were concluded in August 2008.

A Nag weapon with a modified seeker successfully destroyed a thermal target system (TTS) at a range of 4km during test firing conducted in the Mahajan Field Firing Range, Rajasthan, in January 2016.

The anti-tank missile took part in the Bahrain International Airshow in Bahrain in January 2016. It will undergo final user trials under different weather conditions in 2016.

The Nag anti-armour guided weapon’s airframe is built with lightweight and high-strength composite materials. The missile features top-attack capability and has high immunity to countermeasures.

A blunt nose cone houses the guidance system, while the middle portion accommodates a compact sensor package and the main charge of the warhead. A booster rocket motor is located towards the rear. Four tail fins are fitted at the rear to stabilise the missile while in flight.

A real-time image processor with fast and efficient algorithms is installed next to the guidance section to provide automatic target detection and tracking capabilities. The digital autopilot offers guidance, stability and control for the missile during the flight.

Nag is also outfitted with an electric actuation system for flight control.

A passive imaging infrared (IIR) homing seeker guides the missile to the target after its launch in all lighting conditions. The missile can be optionally offered with a millimetre wave active radar seeker.

The Namica variant has lock-on-before launch capability, while the air-launched configuration uses lock-on after launch technology.

An 8kg tandem-shaped charge high-explosive anti-tank (HEAT) warhead, with a precursor and a main charge, provides the weapon with a high kill probability.

The precursor charge penetrates the explosive reactive armour (ERA) of the tanks and the main charge is intended to destroy the main armour.

The weapon can fly at a speed of 230m/s and has the capability to engage both static and moving targets under all weather conditions during the day and at night. The range of the land version is 4km, while HELINA can reach up to 7km.

“Nag can be launched from land and air-based platforms.”

Up to eight ready-to-fire missiles can be carried in two quadruple armoured box launchers mounted on the NAMICA anti-tank guided missile.

Each launcher can fire four missiles in one minute. The NAMICA vehicle can be optionally equipped with an additional four missiles.

This project forms part of our recent analysis and forecasts of the global missiles and missile defence systems market available from our business information platform Strategic Defence Intelligence.