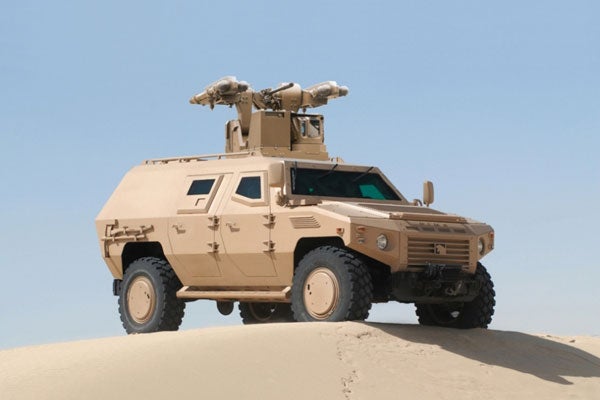 The vehicle was developed by MBDA in collaboration with Rheinmetall Defence Electronics (RDE). The base MPCV systems are based on Renault Trucks Defense’s Sherpa 3A all-terrain armoured vehicle. The MPCV can be integrated onto various armoured vehicles with a payload capacity of 3t.

Development of the MPCV

The development of the MPCV took four years to complete and was wholly funded by MBDA. The first export order for the MPCV was received in February 2011 from an undisclosed customer. The integration of the MPCV system on the customer’s selected vehicle took approximately three years, and the integration and factory acceptance test was completed in November 2013.

MBDA conducted two Mistral missile firings at the end of 2009 to validate the MPCV system. A number of test firings, including a firing test simulating a saturating air attack scenario, were conducted at Direction Générale de l’Armement’s (DGA) missile test firing centre in Biscarosse, Landes region of France in June 2010, following which the final qualification of MPCV was achieved in 2010.

MBDA also plans to develop a land combat version of the MPCV which will deploy the new Missile Moyenne Portée (MMP) medium range surface attack missile being developed by the company.

The highly mobile 4WD (4×4) and 6WD (6×6) wheeled MPCV provides high level of crew protection by withstanding nuclear, biological, or chemical (NBC) weapons, bullets and shrapnel. It is capable of detecting, tracking and engaging targets on the move.

The gyro-stabilised day/thermal electro optical sensor suite of the MPCV was developed by Rheinmetall Defence Electronics. It includes television (TV) and infrared (IR) sights, laser range-finder and automatic tracker enabling the vehicle to carry out surveillance during day and night.

Thales’ VHF PR4G-F@STNET battlefield voice/data radio system has been integrated in the MPCV. The communications system is capable of transmitting voice and data simultaneously, and has the capacity to handle communications even in hostile environments.

Performance of the multipurpose combat vehicle

The missiles installed on the MPCV enable interception of manoeuvring air targets such as helicopters, aircraft and UAVs within the range of six kilometres and altitudes exceeding 3,000m. The Mistral 2 missile’s fire and forget capability, ease of operation and high reliability provides performance advantages to the MPCV.

“The communications system is capable of transmitting voice and data simultaneously.”

The high mobility and short reaction time of two seconds enhances air defence capabilities against saturating threats. A unit of four MPCVs take less than 15 seconds to engage up to 16 different targets coming from any direction. The vehicle can be operated on a stand-alone basis with a single soldier or by a two-man crew including a team leader.

The MPCV system can also be controlled remotely through a state-of-the-art fully mobile workstation which can be installed in a building, a bunker or any other protected position based on the requirements.