ARTEC shareholders in the participating country 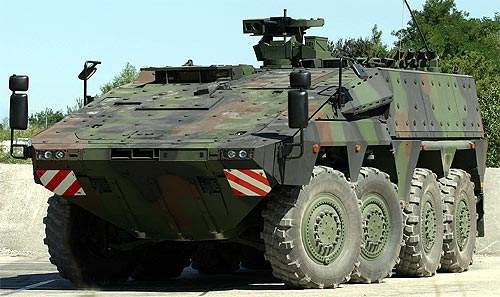 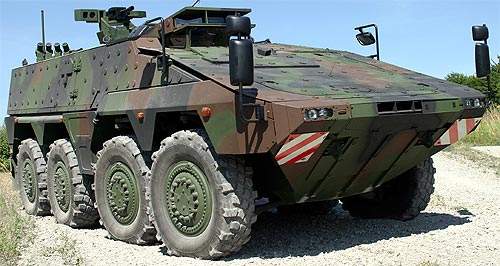 272 Boxer vehicles have been ordered by the German Army and 200 vehicles by the Royal Netherlands Army.

The Boxer is based on a modular design to allow maximum flexibility for different mission requirements. 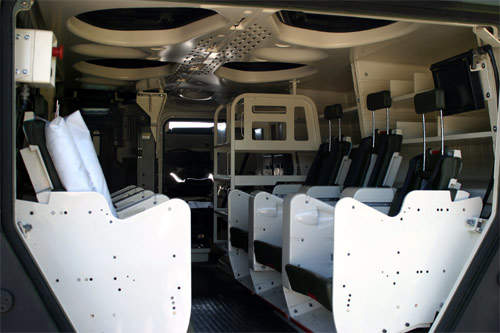 The Boxer design will provide 8x8 APC and CP vehicle versions and also allow for the development of other variants using the same base vehicle. 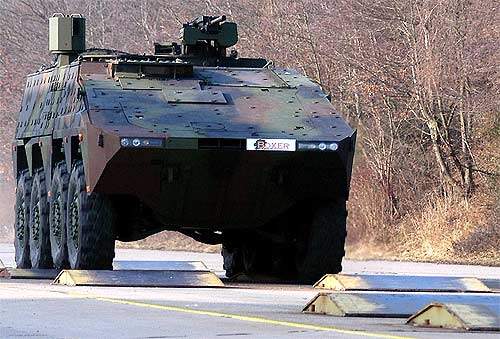 Boxer has an integrated weapon station on which various weapons can be mounted, including 7.62mm or 12.7mm machine guns and a 40mm grenade launcher. 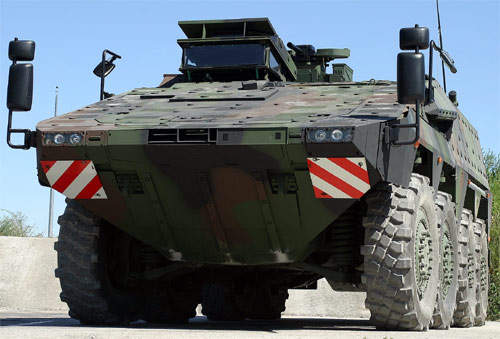 The Boxer MRAV was an international collaboration between the UK, Germany and the Netherlands. 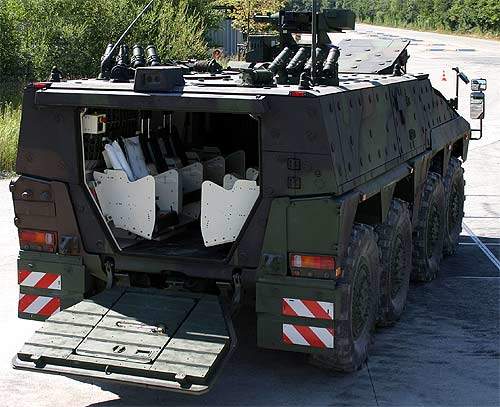 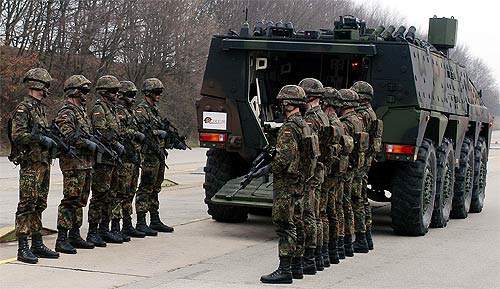 Soldiers lining up behind a Boxer vehicle with the rear doors open.

The governments of the UK and Germany signed a contract in November 1999 for the collaborative development and initial production of a family of next-generation armoured utility vehicles.

The programme was known as the Multi-Role Armoured Vehicle (MRAV) in the UK, and as the Gepanzertes Transport-Kraftfahrzeug (GTK) in Germany.

In February 2001, the Netherlands signed a memorandum of understanding to join the programme. The Dutch programme is called the Pantser Wiel Voertuig (PWV). In December 2002, it was announced that the vehicle would be called the Boxer.

Industrial group ARTEC GmbH consisting of Krauss-Maffei Wegmann (KMW) and Rheinmetall Landsysteme from Germany, and Stork of the Netherlands is the prime contractor for the programme.

The programme is being managed by the European Armaments Agency, Organisation for Joint Armament Cooperation (OCCAR). Stork PWV became part of Rheinmetall in March 2008.

In July 2003, the UK Ministry of Defence (MoD) announced it would withdraw from the programme to pursue a new national programme, the future rapid effect system (FRES). The MoD required a lighter more easily deployable vehicle.

The MoD announced its plans to re-join the Boxer programme in April 2018 for its Mechanised Infantry Vehicle (MIV) programme.

“In 2003, the UK Ministry of Defence announced it would withdraw from the programme to pursue a new national programme, the future rapid effect system (FRES).”

The UK, Germany and Netherlands were each to receive four prototypes and a first batch of 200 vehicles. The first prototype, in German APC configuration, was rolled-out to representatives of OCCAR and participating nations in December 2002 and the first Dutch prototype, a command post version, was completed in October 2003.

A contract was signed in November 2004, between OCCAR (for Germany and the Netherlands) and ARTEC, for the bilateral continuation of the development programme. A total of 12 prototype vehicles have been built and are undergoing industry trials.

ARTEC presented a bid to OCCAR for the first production batch of 400 vehicles in November 2005, which was rejected on grounds of cost.

The Dutch announced in February 2006 that it would launch a new competition for the requirement. However, in May 2006, ARTEC submitted a revised bid for the Boxer.

In July 2007, Boxer was one of three vehicles that took part in trials (the ‘Trials of Truth’) for the utility variant of the UK Army’s FRES.

The General Dynamics Piranha V was provisionally selected for the requirement in May 2008, although in December 2008 the preferred bidder status was withdrawn.

Requirements and variants of the internationally-built military vehicle

The 200th Boxer series vehicle was delivered to OCCAR and the Royal Netherlands Army received the first Boxer vehicle in August 2013.

In June 2014, the Royal Netherlands Army received the first of 52 Boxer Ambulance vehicles ordered by the Defence Material Organisation.

Two contracts have been signed with OCCAR for the Boxer programme in February 2017, which will be added to the German fleet.

In June 2017, ARTEC received a contract from OCCAR to retrofit 246 Boxer vehicles to the A2 built-standard through 2023.

The Slovenian Ministry of Defence ordered 48 Boxer infantry fighting vehicles (IFVs) in different versions in March 2018. The vehicles are scheduled to be delivered by 2020.

In August 2018, Rheinmetall won the A$3.3bn ($2.36bn) contract from the Australian government for 211 Boxer advanced wheeled armoured vehicles fitted with Lance 30mm turret. The delivery of these vehicles will take place between 2019 and 2026.

The Boxer design provides 8×8 armoured personnel carrier and command vehicle versions and allows for the development of other variation models using the same base vehicle. The ambulance version can accommodate six seated or three stretcher casualties. Boxer provides the capability to operate in both high-intensity conflict, as well as in relief and humanitarian operations.

Design, features and armaments of the multirole armoured vehicle

The design is based on a modular structure selected to provide maximum flexibility for multipurpose operations. The vehicle incorporates a high level of standardisation and uses commercially proven automotive components. The 8×8 vehicle provides a load capacity of up to 8t and has an internal capacity of more than 14m³.

“The programme was known as the MRAV Multi-Role Armoured Vehicle (MRAV) in the UK, and as the Gepanzertes Transport-Kraftfahrzeug (GTK) in Germany.”

Mission modules, which fit into the base vehicle, provide static battlefield installations to suit each nation’s specific requirements, including headquarters, medical units and logistic centres.

The modules incorporate a primary safety cell with a triple floor. The base vehicle operates independently from the modules. Units are air transportable. The modules are interchangeable in less than one hour.

The weapon station is reconfigurable to suit the specific national requirements and the module for mission specific equipment is replaceable within one hour. German vehicles are armed with the Krauss-Maffei Wegmann Type 1530 Gun Mount, with a 40mm automatic grenade launcher.

Under an order placed in January 2008, Dutch vehicles will be fitted with the Kongsberg Protector weapon control system, as well as fitted to US Army Stryker vehicles, armed with a 12.7mm machine gun.

Protection and mobility of the Boxer family of armoured utility vehicles

The basic shell is made of high-hardness steel. Modular armour is sandwiched between the vehicle cell and the steel coat, with all three elements secured by fastening bolts. Currently the modular armour, which includes top attack protection, is a specialised ceramic mix.

The modular design allows future generations of armour technologies to be fitted in place of current designs by simple slab replacement. The hull is designed to beat blast mine attacks by shaping the blast away. In addition, a double-lined hull soaks up critical blast deformation.

The vehicle’s thermal acoustic and radar signature management capability is at the forefront of armoured vehicle stealth technology and provides a low signature.

A road range of more than 1,000km, combined with a very smooth and quiet ride, provides an unaided operational deployability unmatched among in-service armoured utility vehicles.