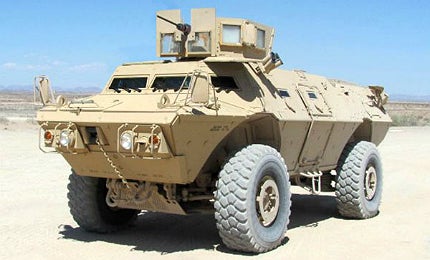 The Mobile Strike Force Vehicle (MSFV) is a new 4×4 armoured vehicle developed by Textron Marine & Land Systems for the Afghanistan National Army (ANA), under the US Army’s MSFV programme.

The first 18 production MSFVs, consisting of three variants, were shipped to Afghanistan in November 2011. All three variations underwent rigorous tests at Yuma Proving Ground (YPG) prior to delivery.

The US Army began the fielding of MSFVs for the ANA in February 2012. The MSFVs are deployed into the quick reaction force (QRF) battalions (known as kandaks in Afghan) of the ANA.

Textron Systems contracted seven Canadian companies to supply components for the MSFV programme. The components are being integrated into the MSFVs at manufacturing facilities in Louisiana.

“The first 18 production MSFVs, consisting of three variants, were shipped to Afghanistan in November 2011.”

In May 2011, Textron Marine & Land Systems was awarded with a full-rate production contract by the US Army to supply 240 MSFVs for the ANA. The contract also includes the provision of related equipment, spares, field service and training.

In March 2012, Textron Marine & Land Systems was awarded a contract option for an additional 64 MSFVs to be delivered to ANA. In April 2012, a second option to deliver 65 more MSFVs in all three variants was awarded by the US Army.

In June 2012, Textron Marine & Land Systems received a third contract option from the US Army Contracting Command to supply 71 MSFVs for the Afghanistan National Army (ANA). The cost of the contract is not-to-exceed $79.2m and the deliveries are scheduled to conclude by October 2013.

In March 2013, Textron Marine & Land Systems was awarded a $113.4m foreign military sales (FMS) contract by the US Army Contracting Command to deliver 135 MSFVs for the ANA. Deliveries are scheduled to conclude by February 2014.

Textron Marine & Land Systems has received orders for a total of 634 vehicles to-date. The orders include test MSFVs and low-rate initial production vehicles.

The MSFV is being produced in three variants, including the MSFV armoured personnel carrier (APC) fitted with the standard 40mm/.50 calibre machine-gun turret, an APC with objective gunner protection kit (OGPK) and a raised hull ambulance variant. The US plans to supply 352 turreted APC vehicles, 142 OGPK vehicles and 23 ambulance vehicles to the ANA.

The MSFV’s design is based on the combat-proven M1117 armoured security vehicle (ASV). The hull was stretched by about 0.6m more than its predecessor.

Armaments and self-protection of the MSFV

The MSFV variants with a standard turret can be mounted with 40mm grenade machine gun / 50 calibre machine gun and a smoke grenade launcher.

“The MSFVs are deployed into the quick reaction force (QRF) battalions (known as kandaks in Afghan) of the ANA.”

The MSFV is equipped with an enhanced survivability (ES) package, which offers a high-degree of protection for the occupants. The package integrates slightly larger HEMTT (heavy expanded mobility tactical truck) tyres with a different axle design. The larger tyres raise the vehicle higher off the ground for enhanced survivability against land mines.

The ES-equipped vehicles retain the original V-shaped hull design of the ASV. The hull further enhances the survivability by deflecting the impact of the mine blast away from the vehicle. The turreted MSFV variants can be fitted with an optional mine roller for operating in the areas heavily contaminated by land mines.

Engine and mobility of the 4×4 armoured vehicle

The MSFV is powered by a Cummins diesel engine coupled to an automatic transmission. The suspension system fitted on the vehicle increases the ground clearance, which is about eight inches higher than that of the M1117 ASV. The vehicle is equipped with all-wheel drive and a central tyre inflation system (CTIS) for high mobility and ride quality.

Located north-west of Lashkar Gah in the Helmand province, Camp Bastion is a prominent English military base in Afghanistan.

The changing face of warfare has spawned new requirements for vehicles. While there is still an overwhelming requirement to protect troops from mine and roadside bomb attacks using highly armoured patrol vehicles, there is also a need for much smaller, lighter, relatively unarmoured vehicles to transport small bodies of men over a short range for strike and reconnaissance missions.