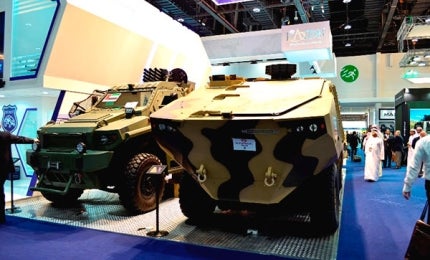 The new Matador 8×8 wheeled armoured personnel carrier (APC) was unveiled at the IDEX 2015 International Defence Exhibition & Conference held in February in Abu Dhabi, UAE. It is being developed by STREIT Group, an armoured vehicle designer and manufacturer based in Canada.

The vehicle offers enhanced blast and ballistic survivability, increased output power and superior manoeuvrability. It can be used by the armed forces to safely transport military personnel to the battlefield.

The Matador 8×8 armoured personnel carrier is based on a permanent 8×8 drive configuration and features a monocoque V-shaped hull structure.

The APC is operated by a crew of two members, including a commander and a driver, while its spacious interior facilitates comfortable seating for an additional ten personnel. Cameras are fitted at the front and rear of the cockpit to provide improved situational awareness for the operators.

The armoured vehicle has a length of 8.93m, a height of 2.81m and a width of 2.71m. Its wheelbases are 1.65m, 2.5m and 1.5m. Its troop compartment is attached with a hydraulic rear door with a narrow opening, which facilitates loading / unloading of small cargo loads, as well as for easy entry and egress of troops.

The troop compartment is installed with two roof hatches with folding-step handles for observation and firing. The roof hatches also allow troops to quickly and safely escape in an emergency.

The Matador armoured vehicle is integrated with a turret hydraulic gunner stand, a smoke launcher system and a remote-controlled weapon station. Self-protection for the occupants is offered by a standard 50-calibre machine gun mounted on a roof turret.

Tatrapan is a 6×6 multipurpose armoured vehicle manufactured by VYVOJ Martin, a company based in Slovakia.

The APC is armoured to Level 4 of the Nato standard STANAG 4569 and can withstand strikes from kinetic energy, artillery, as well as grenade and mine blast threats. The suspended seats provide increased blast protection, while the blast mitigation floor mat reduces injuries caused by an explosion. The vehicle’s V-shaped hull structure protects the crew compartment against IED and ballistic threats.

Engine details of the 8×8 APC

Located behind the crew compartment, the propulsion system also consists of reinforced suspension components to increase the friction between the tires and the road surface.

The vehicle incorporates Volvo VT1906PT transmission system with a six-speed automatic gearbox. Its transfer case is covered with V-shape tray.

Maximum road speed of the Matador APC is roughly 80km/h and the range is approximately 1,000km. The vehicle can ford at 1.2m, trench at 2m and negotiate vertical steps of 0.6m. Its gradient and side slopes are 60% and 30% respectively.