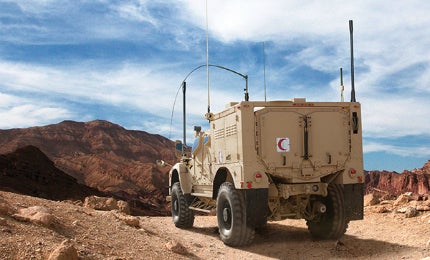 MRAP All-Terrain Vehicle (M-ATV) extended wheel base medical (EXM) is a new ambulance version in the M-ATV series of vehicles from Oshkosh Defense, an Oshkosh Corporation company. The vehicle was unveiled at the International Defence Exhibition and Conference (IDEX) held in Abu Dhabi, UAE, in February 2015.

The M-ATV is used in medical evacuation (MEDVAC) missions to offer optimum protection to crew, medics and patients in high-threat environments.

Oshkosh has also developed another M-ATV tactical ambulance variant, which was showcased at AUSA’s Army Medical Exposition held in San Antonio, Texas, in June 2011 and the International Armoured Vehicles Conference held in Farnborough, UK, in February 2012.

The interior design of M-ATV EXM was developed by Oshkosh in collaboration with the US Army Medical Department (AMEDD). The vehicle is based on M-ATV extended wheel base platform and offers similar silhouette compared to other M-ATV variants.

The crew capsule can accommodate seven people including two crew members, one medic, two ambulatory patients and two litter-bound patients. Its centrally-positioned medic’s seat enables rapid access to patients and medical equipment. The medic area of the vehicle is covered with vinyl floor, which can be easily cleaned and sanitised.

M-ATV EXM includes a loading ramp with forward-locking mechanism glides, which can secure any Nato standard litter into position.

"The M-ATV is used in medical evacuation (MEDVAC) missions to offer optimum protection to crew, medics and patients in high-threat environments."

The efficient litter assist system aboard the vehicle can load patients in less than two minutes without any risk of medic crews becoming targets. The vehicle is also integrated with an optional gunner protection kit (GPK), supplied by Oshkosh, including a turret ring and gunner sling with 360° rotation.

M-ATV EXM is fitted with a 7.2l Caterpillar® C7 engine, which can generate 276kW of power and torque of 1,254Nm. The engine is coupled to Allison® 3500 SP six-speed automatic transmission system.

The wheels are fitted with 16.00R20 tires, whilst suspension durability profile of the vehicle is 70% off-road and 30% on-road.