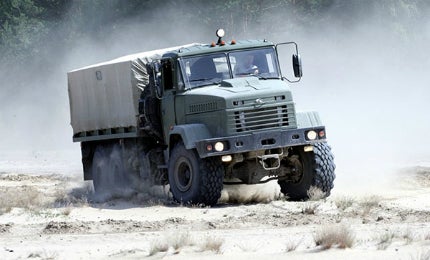 Designed and built by Ukrainian PJSC AutoKrAZ, the truck can be used for towing heavy artillery systems with a calibre between 152mm and 203mm. It can also serve as a ballast prime mover for aircraft transportation on airfields.

The Lao People’s Democratic Republic awarded a contract to AutoKrAZ for the supply of KrAZ-6322 AWD military trucks in December 2014. The company shipped the first batch of vehicles in May 2015.

The KrAZ-6322 tactical vehicle is based on a 6×6 chassis. It can carry up to 24 people while its cabin accommodates up to three people.

Recommended towed trailer weight for aircraft on the concrete airfields is 75,000kg.

A unique winch with a tractive force of approximately 12t is fitted to provide self-recovery, recovery of stuck vehicles, and easy loading of heavy cargoes on a trailer. The vehicle can be built in both left-hand and right-hand drive versions, based on customers’ requests.

The truck offers armour protection for the occupants, and main units, against mine blasts. It also features defensive electronic countermeasures.

The KrAZ-6322 military platform truck is powered by an eight-cylinder, V-shaped, turbo-charged YAMZ-238DE2 diesel engine, with a generating capacity of 330hp. The engine is equipped with an air cleaning system and is coupled with the 9JS150ТА transmission system. It complies with the Euro 0 emissions standards.

An eight-speed, two-range type YAMZ-2381 mechanical gearbox is incorporated into the vehicle, alongside a YAMZ-183 single disk clutch. The vehicle is also fitted with 530/70-21 tyres, which employ a tyre pressure control system and centralised tire inflation system to obtain high off-road capability.

It features two-stage, one-speed central truck driving axles with cross-axle lockable differentials, and a through-type intermediate axle. It also has a mechanical, two-shaft transfer case with a lockable inter-axle, and inter-wheel differentials.

The truck is equipped with two fuel tanks, each with a capacity of 250l, while the engine burns 39l of fuel per 100km.

Mobility of the KrAZ-6322 military truck

Excellent manoeuvrability and high cross-country ability in difficult environmental conditions is offered by the KrAZ-6322 military truck; it is capable of moving through any terrain. The truck can also withstand temperatures ranging between -50ºC and +60ºC.