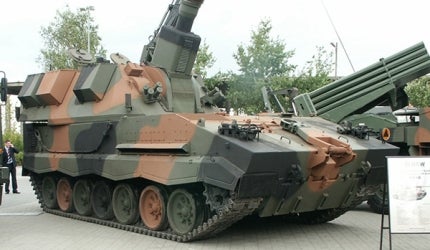 The Polish government approved the procurement of the 155mm KRAB howitzers in late 2006. A total of 72 KRAB vehicles will be initially delivered to the Polish Army.

In May 2008, Polish MoD issued a contract for the low rate initial production of the KRAB howitzer. Two batteries of KRAB vehicles were supplied under the contract.

"The first KRAB prototype was completed in June 2001."

The Polish Ministry of Defence issued a request for proposal (RFP) to HSW for developing 155mm self propelled howitzers. It also initiated a tender process for the turret. GEC Marconi (now BAE Systems) was selected as a preferred bidder for the turret system.

The first KRAB prototype was completed in June 2001. It underwent a series of trials until the end of November 2001. The research and development phase ended with the completion of qualification trials completed in 2003. The third KRAB prototype completed its first test firing in July 2011. It was equipped with on-board electronics and FONET communication system from WB Electronics.

The KRAB features an all-welded steel hull offering protection from small arms fire and shell splinters. The vehicle houses five crew members. The driver is accommodated in front of the vehicle on the left side. The power pack is on the forward right with diesel fuel tanks placed under the bottom of the vehicle.

The turret is mounted on the rear end of the vehicle with the crew accessing the vehicle through a large door in the rear side of the hull. The vehicle can be equipped with NBC system, self-entrenching blade, fire suppression system and a laser warning system.

The KRAB SPH has a maximum length of 12m, width of 3.5m and a shipment height of 3.4m. The maximum height of the vehicle with AA machine gun is 3.8m. The combat weight with crew is 52,140kg.

The driver has a single-piece hatch cover provided with a single, wide-angle day periscope, or a passive periscope for driving at night. A direct fire sight and a laser range-finder are also fitted coaxial with the main gun. The vehicle also integrates a navigation system and a DD-9620 terminal providing target information. The muzzle velocity measuring system above the main gun feeds information to the fire-control system.

The ZZKO TOPAZ fire-control system controls the turret, gun layer computer and other subsystems. The auxiliary power unit of the turret ensures the operation of onboard systems during shut down of the main diesel engine.

The primary armament of the KRAB is a 155mm/52 calibre gun. It has a burst rate of fire of three rounds per ten seconds. The gun can fire 155mm Nato projectiles for a maximum range of 40km. Forty rounds of ammunition are stowed inside the turret and chassis.

The turret is mounted with a 12.7mm machine gun serving as a secondary armament for the vehicle. KRAB is also armed with a bank of four 81mm smoke grenades on either side of the turret.

The KRAB 155mm howitzer is powered by a S12-U four stroke, 12-cylinder, multi fuel, water-cooled, turbocharged diesel engine. The engine is coupled to a mechanical transmission with transfer box and two gear boxes (seven forward and one reverse gear). The engine delivers a maximum power of 625kW at 2000rpm.

The howitzer is equipped with the torsion bar type suspension. Either side of the vehicle features seven, dual, rubber-tyred wheels with the front drive sprocket and rear idler. The vehicle can traverse a vertical obstacle of 0.8m and a trench of 2.5m. The KRAB 155mm howitzer can travel at a maximum speed of 60km/h on surface roads. It has a maximum range of 650km with full fuel tanks.