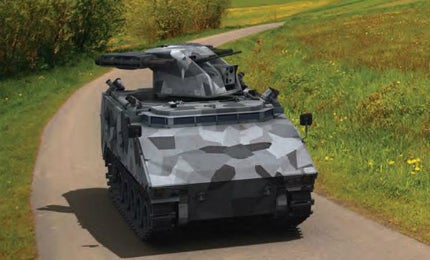 The vehicle is manufactured by FNSS Savunma Sistemleri (FNSS). It was unveiled at the International Defence Industry Fair (IDEF) held at Istanbul, Turkey, in May 2013.

The AMX 10RC is a medium-weight reconnaissance vehicle armed with a 105mm cannon. The vehicle, supplied by Nexter Systems (formerly Giat), has been in service with the French Army (300) since 1980 and is also in service with Morocco (108) and Qatar (12).

The Kaplan LAWC-T vehicle features a well-sloped glacis plate and the vertical hull sides are fitted with additional armour. It is a fully-tracked and low silhouette vehicle integrated with sophisticated imagers, long-range charge-couple device (CCD) cameras, and laser rangefinders to be used in reconnaissance and surveillance missions.

The vehicle’s power pack, located at the rear of the platform, offers a low thermal and noise signature.

Up to five crew members can be accommodated by the vehicle, with driver and commander are seated side by side in the front. Eight periscopes at the forward hull ensure a high level of situation awareness and high field-of-view.

The entry and exit points of the vehicle include a clam-shell type door at the rear, two side doors, and wide commander and driver hatches in the front.

The vehicle is also configured with all-around thermal / day cameras for providing situational awareness to commander and driver during day and night. Its modern open architecture enables integration of different electronic subsystems, and allows for future upgrades according to the mission requirements.

Armament and self protection

The Kaplan LAWC-T vehicle can be equipped with manned and unmanned turrets based on the customer’s needs.

Armament fitted to the vehicle includes a 12.7mm calibre heavy machine gun, and anti-armour turrets mounting a variety of missiles.

A 25hp/t four-stroke diesel engine is fitted to the vehicle. The standard fuel tank has a storage capacity of 300l, while the engine is coupled to an automatic transmission system. Kaplan is also equipped with hydrostatic type steering system.

The vehicle features torsion bar type suspension with five dual road wheels on either sides, drive sprocket at the front and idler at the rear, as well as three shock absorbers on each side. It can be fitted with conventional T130 / T150 tracks or rubber band tracks.

The vehicle can run at a maximum speed of 70km/h for a range of 600km. It has greater mobility, which allows it to maintain pace with the latest main battle tanks both on-road and in cross country conditions.

Kaplan has the ability to climb obstacles of 0.7m and can cross trenches of 1.5m. It can ford a maximum dept of 1.1m and can be optionally equipped with amphibious capability.

The gradient and side slopes of the vehicle are 60% and 30% respectively. The vehicle can be transported aboard C130 aircraft as well as railway and sea cargo vessels.