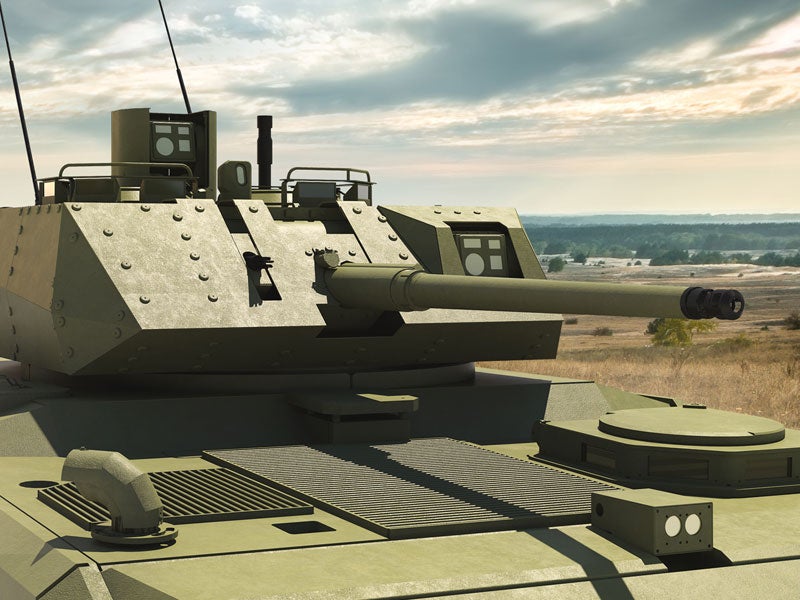 Turkish vehicle manufacturer FNSS Savunma Sistemleri unveiled the new Kaplan-30 next-generation armoured fighting vehicle (NGAFV) in May 2017. The vehicle is the latest addition to the Kaplan family of NGAFVs.

The vehicle can be configured as armoured personnel carrier to transport fully equipped soldiers to the battlefield under high-protection. It is also suited for special purposes such as security, surveillance and reconnaissance.

The Kaplan-30 armoured combat vehicle is based on tracked chassis and features modular design. Its hull is welded and covered with composite armour made of steel alloys and ceramics.

The vehicle is 6.7m-long, 3.5m-wide and 2.2m-high, and is manned by three crew members, including driver, gunner and commander.

The armoured personnel carrier variant can accommodate up to eight infantry soldiers, as well as crew, while the turreted version can house six dismounted troops. Personnel enter or leave the vehicle through a hydraulically operated ramp at the rear.

The front section of the vehicle holds propulsion system and driver’s station. The commander and gunner seats are placed in the middle, while the troops are seated in the rear of the vehicle. Two hatches are available on the roof of the vehicle to provide field of view for the driver and troops.

Mounted on the roof of the Kaplan-30 armoured vehicle, the FNSS Teber-30 remote-controlled turret provides high-lethality and fire control in all weather conditions. It is operated by two crew members and is stabilised in two axes.

“The vehicle can be configured as armoured personnel carrier to transport fully equipped soldiers to the battlefield under high-protection.”

The primary and secondary weapons of the turret are 30mm Mk44 dual feed automatic cannon and 7.62mm machine gun respectively. The Mk44 cannon has a rate of fire of 200 rounds a minute, while the 7.62mm gun can fire 1,000 ready rounds.

An electric drive system allows the turret to rotate through 360° in the transverse axis at a speed of 60°/s.

The mine-resistant seats and the floor surface offer high level of protection for the vehicle’s occupants against improvised explosive devices (IEDs) and mine blasts.

Smoke grenade dischargers are placed on either side of the turret and the rear of the hull, to further increase the crew survivability.

The exterior of the turret is built using all-welded aluminium armour with add-on composite and steel armour to provide increased ballistic protection.

The commander’s station is equipped with an independent panoramic sighting system. Consisting of day and thermal imaging sights and a laser rangefinder (LRF), the device provides day and night situational awareness and target designation.

A stabilised gunner’s sight allows the gunner to engage static and moving targets in both day and night conditions. It features day and thermal channels, LRF and fire control capability.

Situational awareness for the driver is provided through hatch-mounted, laser-protected glass periscopes. Thermal sights are fitted to enhance the driver vision in low-light conditions.

Power for the Kaplan-30 armoured fighting vehicle is provided by a single diesel engine, which has a power-to-weight ratio of 20hp/t.

A fully-automatic transmission system is installed to increase the load handling capacity of the vehicle.

The vehicle is equipped with an independent torsion bar suspension system, which uses a torsion bar to reduce vibrations and increase traction.

A 24V electrical propulsion system is fitted to supply power for the onboard equipment. The vehicle carries two fully armoured fuel tanks, located at the rear.

Equipped with six road-wheeled tracks, the Kaplan-30 armoured combat vehicle offers a maximum speed of 65km/h and a maximum range in excess of 500km when travelling on highways.

It can climb grades of 60% and side slopes of 40%, and can cross a 2.6m trench and traverse through vertical obstacles of 0.7m height. The fording depth of the NGAFV is 1.5m.

The vehicle has the ability to execute missions under variable weather conditions at high speed on rugged terrains.