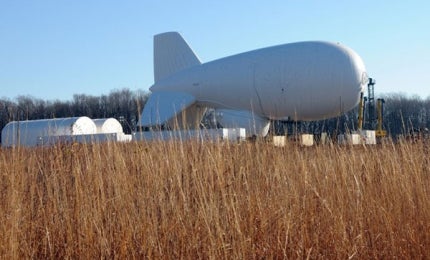 "In December 2014, the US Army and Raytheon successfully deployed a JLENS airship equipped with a surveillance radar over Maryland to monitor the airspace."

JLENS can be integrated with a number of intercept systems that are in service with the US Army, Navy and Air Force, including Patriot air and missile defence system, Standard Missile 6 (SM-6), Advanced Medium Range Air-to-Air Missile (AMRAAM) and the National Advanced Surface-to-Air Missile System (NASAMS).

In December 2014, the US Army and Raytheon successfully deployed a JLENS airship equipped with a surveillance radar over Maryland to monitor the airspace. Upon reaching full operational capability, the aerostat will be handed over to the US Army’s A Battery, 3rd Air Defense Artillery. Carrying the fire control radar, the second JLENS airship is scheduled for launch in 2015.

The large aerostats or tethered blimps have a length of 74m and are filled with helium. The airship can reach altitudes up to 10,000ft above the mean sea level and can remain airborne for approximately 30 days. It is capable of integrating other communications and sensors to provide commanders with increased situational awareness of the battlefield.

Scout SV is the reconnaissance variant of the armoured fighting vehicle developed by General Dynamics UK for the British Army.

The JLENS system is controlled from the ground station and is transportable by road, rail, sea and airways. The tethers transmit power to onboard radars and to downlink targeting the data to a computer processor in the ground station.

The JLENS system’s surveillance radar successfully completed free-space radiation from an elevated airship during a demonstration conducted at the Utah Test and Training Range in February 2009.

Raytheon conducted flight tests of the fire control radar at the Utah Test and Training Range in April 2011. A JLENS blimp successfully performed surveillance missions for 14 days during an endurance test concluded at Utah test range in October 2011.

In January 2013, Raytheon demonstrated the JLENS system’s ability to mount a MTS-B (Multi-Spectral Targeting System) EO/IR payload for use in target tracking with the infrared (IR) sensor.

The US Army completed early user testing (EUT) and a 20-day endurance test of the aerostat system in July 2013. The US Army and the US Air Force demonstrated interception of a cruise missile by an AMRAAM missile integrated with the JLENS in August 2013.

One of the two JLENS orbits procured by the US Army was placed in strategic readiness in June 2014. A series of laboratory tests were conducted in October 2014 to prove the JLENS’ ability to comply with North American Aerospace Defense Command (NORAD) for the protection of airspace over the East Coast region of the US.