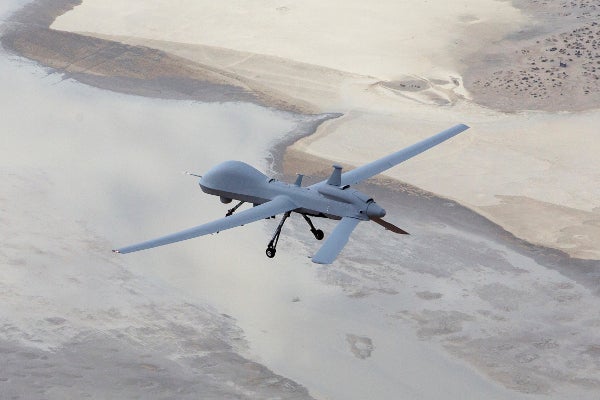 Improved Gray Eagle® (IGE) is an advanced version of the combat-proven Block 1 Gray Eagle unmanned aircraft system (UAS) developed by General Atomics Aeronautical Systems (GA-ASI). It is intended to meet the next-generation combat needs of the US Army warfighters.

A test flight was conducted at the El Mirage Flight Operations Facility. This demonstrated IGE’s ability to endure for more than 45 hours in reconnaissance, surveillance and target acquisition (RSTA) configuration.

The second endurance flight, funded by the US Army’s Product Office for Medium Altitude Endurance (PM-MAE) UAS, was conducted in January 2014. During the flight, the IGE prototype UAS was flown for more than 36 hours with the integration of external signals intelligence (SIGINT) pod and two Hellfire air-to-surface missiles under the wings.

GA-ASI announced its plans to build the second IGE aircraft in May 2014.

The IGE features open, modular architecture and its deep belly fuselage allows carriage of a variety of payloads. It is air-transportable internally by C-130 Hercules turboprop military transport aircraft.

The UAS can carry up to 540lb of payloads internally. It is equipped with an upgraded 500lb centerline hard point for the carriage of an 860lb of internal fuel load or a 360° sensor payload. It can be optionally integrated with an external fuel pod for an additional 450lb of fuel.

Meanwhile an electro-optical / infrared (EO/IR) payload camera, which is mounted under the nose of the aircraft, is used for gathering intelligence and surveillance data. The drone also features a synthetic aperture radar (SAR) and a Ground Moving Target Indicator.

The unmanned air system and its payloads will be controlled by the US Army One System Ground Control Station (OSGCS) and the future Universal Ground Control System (UGCS).

The IGE UAS runs on Lycoming DEL-120 Heavy Fuel Engine (HFE), which has a generating capacity of 205hp. It has a maximum gross take-off weight of 4,200lb.

Maximum airspeed for the Improved Gray Eagle is 167kts and it can reach a maximum altitude of 29,000ft. It also has a maximum flight time of 48 hours, which can be extended for more than 50 hours with an additional fuel tank.