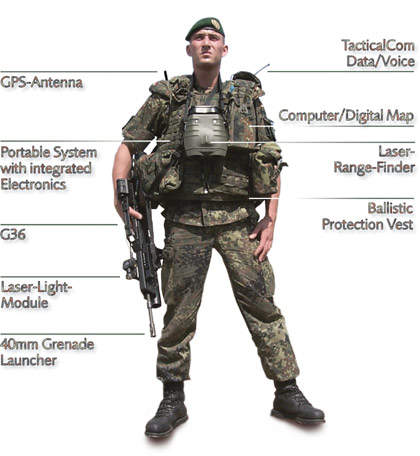 The elements of the German Army IdZ Infantryman of the Future system include: bullet-proof vest, NBC protection, night vision equipment, digital navigation and communication, tactical speech and data communication and a new range of weapons. 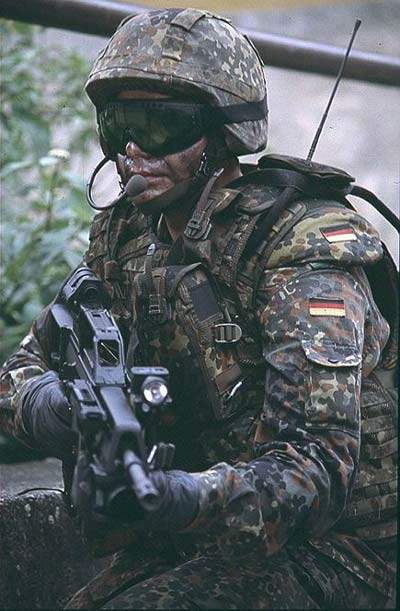 The German Army carried out a five-month trial of the prototype IdZ systems together with additional squad weapons and sighting systems in Kosovo during 2002. 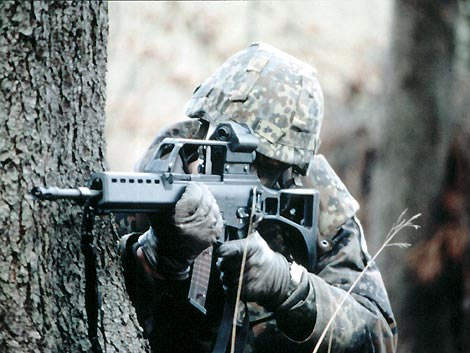 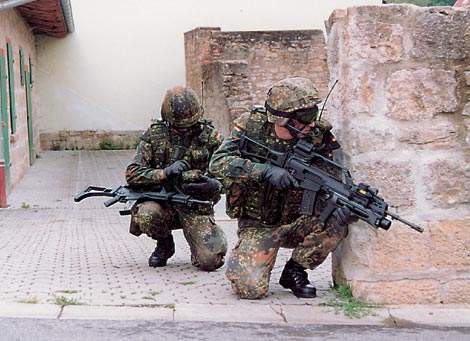 The NavICom C4I system provides the soldier with a digital moving map display showing the soldier's own position, the position of his comrades, danger zones, targets and the enemy situation. 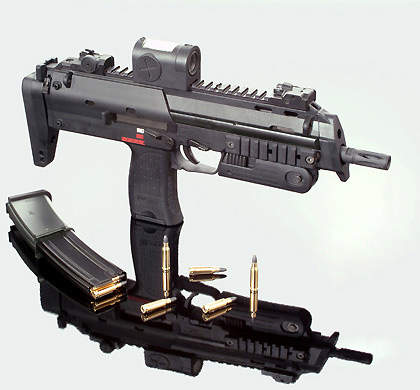 The MP7 personal defence weapon is compact enough to be carried like a handgun but provides the target and body armour penetration capability of an assault rifle. 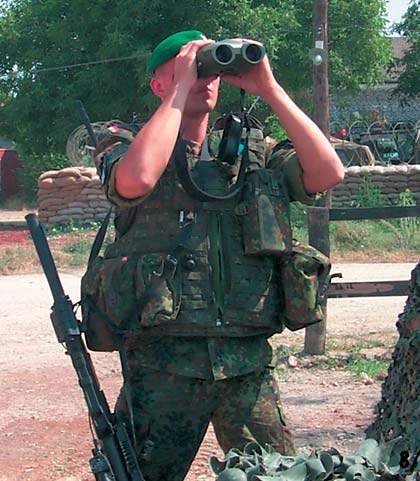 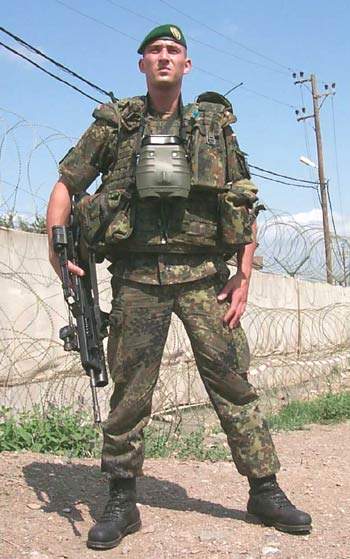 The individual infantryman is equipped with a bullet-proof vest, nuclear, biological and chemical (NBC) protection, night vision equipment, digital navigation and communication, tactical speech and data communication and a new range of weapons.

The German Army carried out a five-month trial of the einsatzbedingter sofort bedarf (ESB) prototype IdZ systems at Prizren in Kosovo during 2002.

"The infantryman of the future system includes protection, communication equipment and a range of weapons."

Two prototype IdZ squad systems, together with additional squad weapons and sighting systems, were used in the trials.

Germany’s Federal Office of Defence Technology and Procurement awarded EADS Defence Electronics a €10m contract for the supply of 150 ESB lot 3 sets (15 sets, each set for ten soldiers) of the IdZ infantryman of the future systems. The contract was awarded to meet the urgent operational requirement for deployment by troops serving in Kunduz, Afghanistan. The first system was handed over to the Army Inspectorate at Hammelburg Infantry School on 1 July 2004.

The contract also incorporates development of a sensor packages for fire control and mine detection, new visor-equipped helmet and a system for monitoring the soldier’s health status. Provision for integration of IdZ-ES technology into armoured vehicles such as the Puma and Boxer is also included .

"In general, an IdZ kit includes, a H&K G36 assault rifle, computers and an information system integrated in the load-carrying vest."

The digital moving map display system shows the soldier’s own position, the position of his comrades, the position of minefields and other danger zones, target and target course, target coordinates and the enemy situation.

The current situation data is received from higher levels of command. Digital voice and data radio communications instantly provide the soldier with commands and reconnaissance data.

The soldier has access to miniature unmanned air vehicles or micro-UAVs and all-terrain unmanned vehicles for safe reconnaissance, for example in urban environments and trenches. The navigation system is equipped with a global positioning system.

The G36 is equipped with a short stroke gas piston that expels forwards away from the soldier. The gas system does not foul back into the weapon interior. This gives reliable operation even after firing 15,000 rounds without cleaning. The rifle can be disassembled and reassembled without tools. The fire selector lever, which serves as a safety switch, allows firing in single shot, multiple round, burst and fully automatic modes

The Dynamit Nobel Panzerfaust 3 anti-tank rocket launcher is fitted with a Dynarange computing sight. The system comprises a disposable rocket launch tube containing the rocket and a reusable sighting and firing unit. The rocket is armed with a shaped charge warhead. The system is suitable for urban warfare deployment and can be fired from an enclosed space.

After a flight of about 5m from the launch tube the rocket’s internal safety fuse is released. The PzF 3 is fitted with a hollow charge which penetrates reactive armour and the PzF 3 Bunkerfaust is deployed against concrete bunkers and other hardened targets. Panzerfaust has a range of 300m against moving targets and 500m against stationary targets.

The advantage of the small lightweight MP7 personal defence weapon is that it is compact enough to be carried like a handgun but still provides the target penetration and modern body armour penetration capability of an assault rifle. The Kommando Spezialkrafte (KSK), the German Army special operations force, has used the Heckler & Koch MP7 since 2002. The MP7 weighs less than 4lb loaded.

The MP7 can be field stripped very quickly without tools. Very little maintenance and cleaning are required because the gas system keeps the weapon clean. Test firings at a range of 45m demonstrate a clustered target grouping of diameter less than 2in in 10-shot semiautomatic mode.

The MP7 has a flat bullet trajectory and full penetration of CRISAT protection, i.e. 1.6mm titanium combined with 20 layers of Kevlar, at 200m target range.

The Heckler & Koch 5.56mm×45 MG4 or MG43 belt-fed machine gun is gas operated with a rotary bolt similar to the HK G36 series. The gun, weighing 8.55kg, has a folding buttstock. Unlike other Heckler & Koch designs, the gun has only safe and full modes of fire. The barrel length is 480mm and the overall length is 1,050mm.

The Zeiss Optronics AN/PAS-13A (V) thermal weapon sight for rifles and light weapons is equipped with a cadmium mercury telluride (CdHgTe) 40×16 detector array operating in the 3.4 to 4.2 micron waveband. The site is easily and quickly mounted on a weapon without tools. The detector is fitted with a thermo-electric cooler. The image has 160 lines, with 160 pixels on each line.

The weapon sight has interchangeable observation and targeting telescopes each with selectable fields of view. An additional RS-170 interface can be used for external viewing.