US Army and US Navy Explosive Ordinance Division 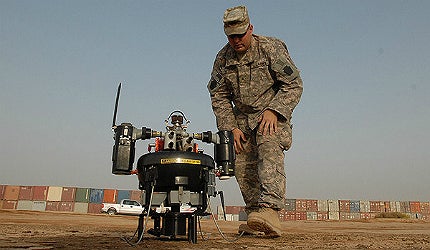 Honeywell T-Hawk (tarantula hawk) is a micro air vehicle (MAV) developed for the US Army as part of the Future Combat System (FCS) programme. Honeywell Aerospace is the developer and manufacturer of the MAV.

“In April 2011, four T-Hawk drones were deployed at the Fukushima Daiichi nuclear plant in Japan for video surveillance.”

T-Hawk was designed to meet the requirements of the Class I platoon-level drone for supporting dismounted soldiers on field. The US Army deployed the MAV in Iraq in 2007. It has been in service with the US Army and US Navy Explosive Ordinance Division since then.

The T-Hawk MAV conducts aerial searches for roadside bombs and inspects suspicious targets from a close range to provide situational awareness. It offers protection to the convoys by scanning roads.

The drone can be used for various missions, including homeland security, IED defeat, target acquisition and damage assessment and civilian purposes. It was deployed extensively in the Iraq and Afghanistan wars and was successful in conducting trials.

In April 2011, four T-Hawk drones were deployed at the Fukushima Daiichi nuclear plant in Japan for conducting video surveillance and nuclear radioactivity readings, after the devastation of the plant due to earthquake and tsunami.

“The development programme of the T-Hawk was launched in 2003 by Defense Advanced Research Projects Agency (DARPA).”

The development programme of the T-Hawk was launched in 2003 by Defense Advanced Research Projects Agency (DARPA). The agency invested about $40m towards the demonstration of the MAV technology.

The Honeywell RQ-16 T-Hawk MAV system consists of two T-Hawk aerial vehicles, a ground control station and associated support equipment. The 14-in diameter circular vehicle can be assembled and deployed in about ten minutes.

It has a weight of about 17lb and is also backpack portable. The unmanned vehicle, with ducted fan design, features vertical take-off and landing (VTOL) and lands on a kickstand.

It can provide exact point deployment and recovery and ease of operation, unlike fixed wing UAVs. The design also facilitates better hovering and staring capabilities than the fixed wing UAVs. The MAV also performs target zoom and follow missions. It is designed for all weather and day / night operations and supports intelligence, surveillance and reconnaissance (ISR) missions.

The T-Hawk can be operated from within the vehicle and by a single person. The navigation is supported by SAASM GPS, IMU pressure altimeter and magnetometer. It uses DDL radio for communications and supports up to 97 selectable channels. The range of communication is about five to ten kilometres.

Control and payloads of the US Army’s T-Hawk

The flight control systems are attached to one side of the T-Hawk’s main body. The payload pods, for forward and downward looking cameras and sensors, occupy the other side. The pods can carry different sensors, such as electro-optical (E-O) colour video camera and infrared (IR) night cameras. The sensor package is modular and interchangeable.

The T-Hawk is powered by a 3W-56 56cc Boxer Twin piston, two stroke gas-powered engine. Each engine produces an output of 4hp. It can fly at speeds of up to 46 miles an hour (mph) at wind speeds of about 17mph. The MAV can reach altitudes of up to 10,000ft and has an endurance of about 46 minutes. Its flight routes can be pre-programmed or controlled manually.

MQ-1C Gray Eagle is an extended range / multipurpose (ER/MP) UAS developed by General Atomics Aeronautical Systems for the US Army.

The MAV also has fully autonomous flight mode, which allows operation with dynamic re-tasking and manual intervention, self propelled VTOL and hover and stare capability. It can be custom programmed to operate in different flight conditions including multiple loiter patterns, up to ten pre-planned flights with control from ground station and with about 100 waypoints in a single flight plan.

The US Army awarded a $61m contract to Honeywell in May 2006 to develop an advanced version of the drone with a heavy fuel engine and long endurance. The US Navy ordered 20 gasoline engine MAVs (GMAV) for deployment with the US Multi-Service Explosive Ordnance Disposal Group in Iraq. The $7.5m worth contract was awarded in 2007. Another order for 372 more MAVs was placed in January 2008.

The US Navy designated the T-Hawk MAVs as the RQ-16A T-Hawk. The navy received the first MAV in August 2009. Six T-Hawk MAVs were ordered by the UK Ministry of Defense in February 2009. The Miami-Dade Police Department has also purchased two of the T-Hawk drones.

Honeywell conducted live demonstration and trials at the Counter-Terrorism and Jungle Warfare College in Chattisgarh state of India, in April 2010. The Indian security forces are likely to procure the T-Hawk micro air vehicles.