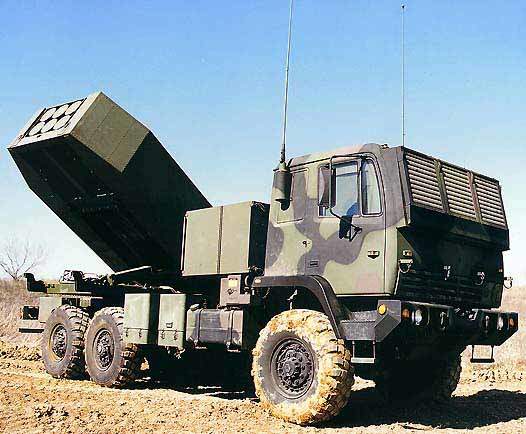 HIMARS is a highly-mobile artillery rocket system offering the firepower of MLRS on a wheeled chassis. 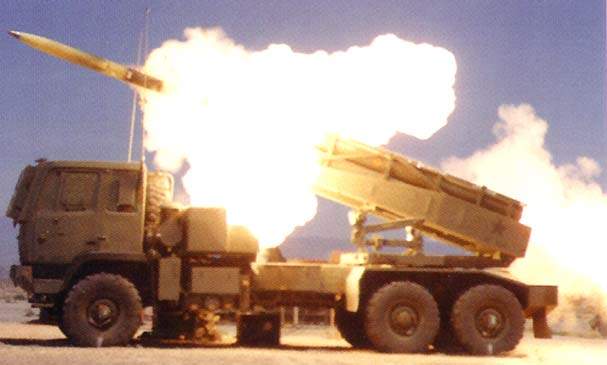 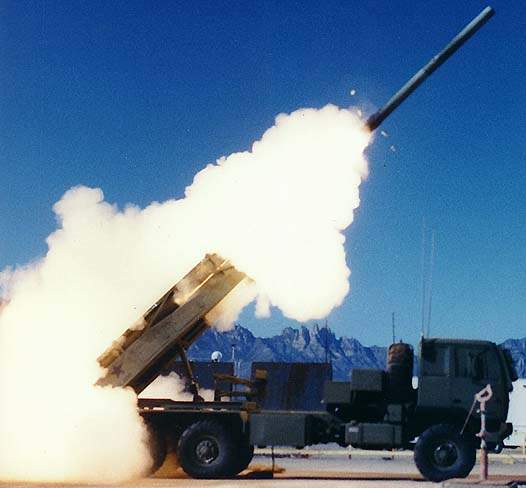 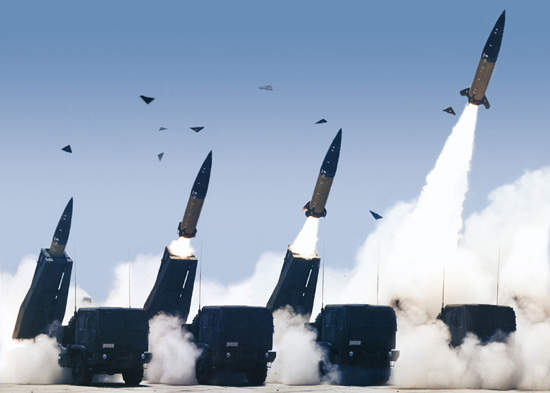 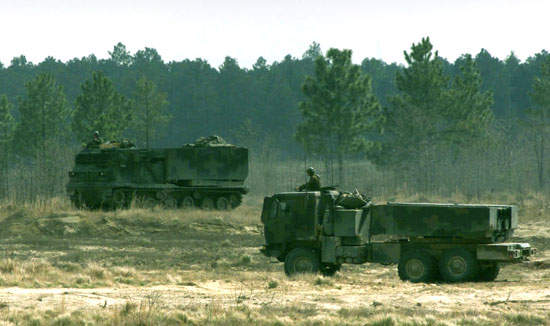 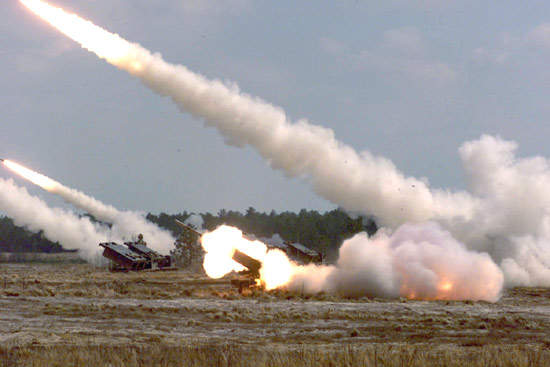 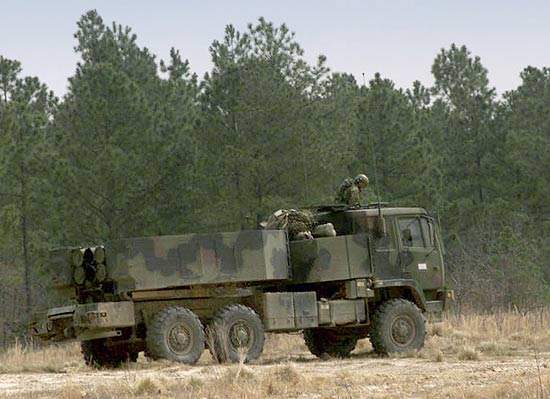 The HIMARS vehicle weighs 24,000lb, half as much as the MLRS. 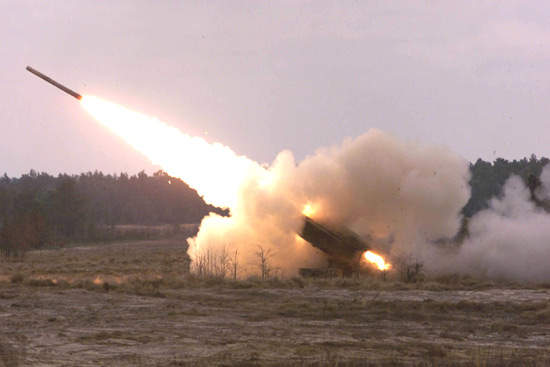 HIMARS can fire the range of MLRS rockets including the new GPS-guided extended range GMLRS. 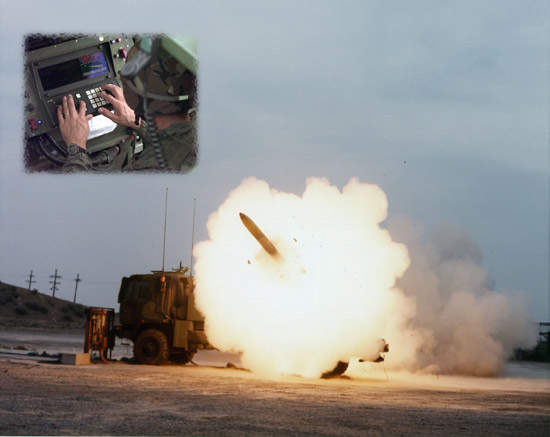 HIMARS is a highly mobile artillery rocket system offering the firepower of MLRS on a wheeled chassis.

It was developed in 1996 by Lockheed Martin Missiles and Fire Control under an advanced concept technology demonstration (ACTD) programme.

HIMARS is intended to engage and defeat artillery, air defence concentrations, trucks, and light armour and personnel carriers, as well as support troop and supply concentrations. The system launches its weapons and moves away from the area at high speed before enemy forces locate the launch site.

HIMARS retains the same self-loading and autonomous features installed on the MLRS.

Lockheed Martin’s universal fire control system (UFCS), a further evolutionary upgrade of the fire control system, has completed development and qualification. From mid-2008, it is being fitted to full-rate production HIMARS. Successful HIMARS test firings of the ATACMS missile (in March 2008) and GMLRS rockets (in May 2008) took place using the new GPS-guided UFCS.

In a typical mission, a command and control post would transmit the selected target data via a secure data link to the HIMARS on-board launch computer. The computer then aims the launcher and provides prompt signals to the crew to arm and fire a pre-selected number of rounds. The launcher can aim at a target in just 16 seconds. It is possible for the crew to select pre-programmed multiple mission sequences, which have been stored in the computer.

In addition to the standard MLRS round, HIMARS is capable of launching the entire MLRS family of munitions, including the extended-range rocket, the reduced-range practice rocket and all future variants. The high-mobility artillery rocket system carries a single six-pack of MLRS rockets, or one army tactical missile system (ATACMS) missile.

“HIMARS is able to launch its weapons and move away at high speed.”

The extended-range MLRS rocket (ER-MLRS) improves the basic M26 range of 32km to more than 45km and the area of influence by 107%.

Extension of the rocket motor has resulted in a reduction in the payload to 518 M85 grenades, but the dispersion of the grenades is improved for better effectiveness with fewer grenades.

In April 2004, HIMARS successfully test fired the new extended range guided rocket GMLRS, with a range of more than 70km.

The Lockheed Martin GMLRS rocket has a GPS, an inertial guidance package and small canards on the rocket nose to enhance accuracy. GMLRS completed system development and demonstration (SDD) tests in December 2002 and entered low-rate initial production in April 2003.

Initial operating capability (IOC) was achieved in 2006, but the system has been operationally deployed since September 2005 in Iraq. The GMLRS is an international programme involving the UK, Italy, France and Germany, as well as the US. The industrial team includes Diehl, MBDA and FiatAvio.

In May 2005, the first deliveries were made of a unitary variant of GMLRS, developed by General Dynamics Ordnance and Tactical Systems, with a single 81.6kg (180lb) warhead and a range of up to 70km. In October 2003, Lockheed Martin was awarded an SDD contract for 86 unitary variant rockets, which were delivered in June 2005. In June 2007, GMLRS Unitary entered low-rate initial production (LRIP).

The Block IA missile range exceeds 300km by reducing the submunition payload to 300 bomblets and adding GPS guidance. The missile, with a single-burst warhead, was first deployed in support of Operation Iraqi Freedom in March and April of 2003.

HIMARS is transportable on the C-130 aircraft, allowing the system to be moved into areas previously inaccessible to the larger C-141 and C-5 aircraft required for the M270 launch vehicle.

In January 2000, Lockheed Martin was awarded an EMD (engineering and manufacturing development) contract to provide six HIMARS launchers. A further two HIMARS launchers were ordered under a two-year user evaluation programme for the US Marines Corps.

The first US Marine Corps battalion equipped with HIMARS, 2nd Battalion, 14th Marine Regiment, was deployed to Iraq in July 2007.

In September 2006, the United Arab Emirates requested the foreign military sale (FMS) of 20 HIMARS launchers plus munitions including 101 ATACMS block 1A, 101 ATACMS block 1A Unitary, 104 MLRS, 130 GMLRS and 130 GMLRS unitary rocket pods. The first unit was delivered in late 2009.

Lockheed Martin was awarded a further contract in January 2007 for 44 HIMARS systems for the US Army and 16 for the USMC.

HIMARS has been evaluated to be used as a common launch platform for GMLRS and ATACMS munitions. Two advanced medium-range air-to-air missiles (AMRAAM) were successfully fired by the HIMARS launchers in March 2009.

In November 2010, BAE Systems signed a $16.3m contract with US Army Tank-Automotive and Armaments Command (TACOM) to supply an additional 44 HIMARS vehicles. The contract is a follow-on to the June 2010 award of $24m for 63 HIMARS vehicles and appliqué kits.

The US Army placed a $139.6m contract with Lockheed Martin in January 2011 for 44 combat-proven HIMARS, bringing the total launchers to 375. The 400th HIMARS launcher was received by the US Army in September 2011.

Lockheed Martin was awarded a $23.17m contract modification by the US Department of Defence in December 2015 for Life Cycle Launcher Support (LCLS) III on all the HIMARS FCS and launcher modules of the US Army and US Marine Corps.

In July 2017, the US Army awarded a $73.8m contract to Lockheed Martin as part of phase two of the Long Range Precision Fires (LRPF) programme, which includes technology upgrades and risk control for the development of a prototype LRPF missile system that can be launched from M142 HIMARS launchers.

The Government of Romania requested 54 HIMARS launchers from the US Defence Security Cooperation Agency (DSCA) in August 2017. The sale also includes 81 GMLRS M31A1, 81 GMLRS M30A1 alternative warheads, ATACMS M57 unitary, and other weapons, at an estimated cost of $1.25bn.

In August 2018, the US Army awarded a $218m contract to Lockheed Martin for the production of 18 HIMARS launchers and associated hardware, as the part of a FMS contract by the end of December 2020.

Lockheed Martin was also awarded a $289m contract by the US Army in September 2018 for the production of 24 HIMARS launchers and associated equipment by July 2022.

Lockheed Martin has delivered approximately 500 HIMARS launchers to the US Army and its international customers as of October 2018.

In July 2019, the company was awarded a $492m contract by the US Army Contracting Command to deliver HIMARS launchers and associated hardware to the US Army, US Marine Corps, Romania and Poland by 2022.