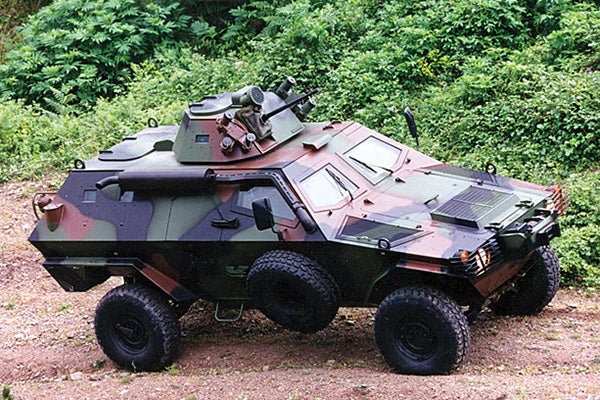 COBRA II was unveiled for the first time in May 2013. The vehicle offers outstanding mobility and firepower in a wide range of missions. It leverages the success of the existing Cobra vehicle platform, which has been in service with 15 countries around the world.

The tactical vehicle has the capacity to transport up to nine troops, including a driver and a commander, and mission equipment. It can operate either in conjunction with allied air defence systems, communication systems and troops, or it can operate independently.

The monocoque hull structure of Cobra II is based on 4×4 chassis. The modular design of the vehicle incorporates advanced technical and tactical characteristics. Its conventional layout houses engine in front, crew section in the middle and troop compartment at rear. Entry and exit for the occupants are provided through two doors at both sides and a rear door.

Cobra II has an overall length of 5.6m, width of 2.5m and height of 2.2m. The wheelbase and ground clearance of the vehicle are 3.5m and 400mm respectively, while the gross vehicle weight is 12,000kg.

The Cobra II can be mounted with a remotely controlled weapon system (RCWS) integrating a 25mm machine gun. The vehicle that was displayed at the 2014 DSA was fitted with a low altitude air defence missile system (AiHSFS missile) from ASELSAN, which protects the vehicle from air attacks. Cobra II can be optionally armed with grenade launchers.

The armoured hull of Cobra II offers protection against 7.62mm rounds and artillery shell splinters. The bottom of the crew compartment is fitted with a removable parabolic-shaped plate for deflection of blast. The vehicle also protects the crew from fragments and improvised explosive devices (IEDs).

Cobra II is powered by a 6.7L, six-cylinder, water cooled, turbo charged, common rail, diesel engine mated to an automatic gearbox (six forward and one reverse). It produces a power of 281hp (210kW) at 2,500rpm, and torque of 970Nm at 1,700rpm. The engine complies with EURO-3 emission standards and is also compatible with F-34 and F-54 fuel.

The approach and departure angles of the vehicle are 48° and 60° respectively. The vehicle can negotiate a gradient of 60% and side slope of 30%, and can cross obstacles of 400mm and trenches of 900mm.

The Cobra II can attain a maximum road speed of 110km/h on road and has a maximum cruising range of 700km.