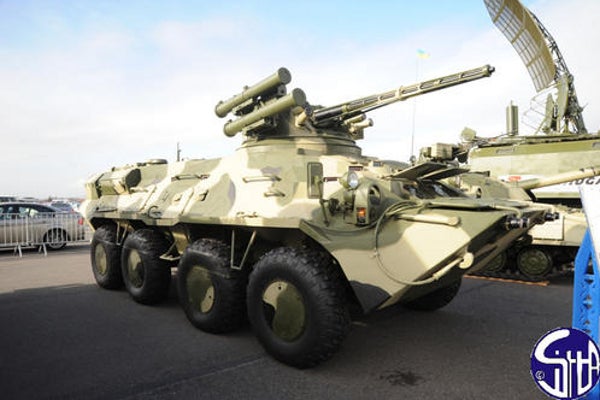 The BTR-3E1 is an 8×8 wheeled armoured personnel carrier (APC) manufactured by the Ukraine-based Kharkiv Morozov Machine Building Design Bureau. The vehicle is primarily developed for the Armed Forces of Ukraine. The vehicle is exported by state-owned export and import firm Ukrspecexport.

The BTR-3E1 is a latest version of the BTR-3U. The vehicle is equipped with new generation communications equipment, and two workstations.

The APC can be used to carry troops, arms and other supplies to support the armed forces in the battlefield. It can be used as a reconnaissance, combat support and patrol vehicle too.

Different variants of the BTR-3 are in service with the armed forces of Azerbaijan, Chad, Ecuador, Kazakhstan, Myanmar, Nigeria and Thailand.

The Royal Thai Army acquired more than 230 BTR-3E1 APCs till date, under agreement with Ukrspecexport.

Thailand placed an order for additional 15 BTR-3E1 and six BTR-3RK vehicles from Ukraine in August 2013.

The BTR-3E1 is offered in a number of configurations to meet the varied requirements of armed forces. The major variants are BTR-3E1K command vehicle, BRM-3E1 combat reconnaissance vehicle and repair-and-recovery vehicle.

"The APC can be used to carry troops, arms and other supplies to support the armed forces in the battlefield."

The other variants include the MOP-3E1 fire support vehicle, the BTR-3E1Sh command and staff vehicle, and the BSEM-3E1 armoured ambulance.

The body and turret of the BTR-3E1 are designed with all-welded steel armour, which provides maximum ballistic protection to troops against small-calibre automatic weapons. The body of the vehicle is lined with Kevlar liner for better protection.

The layout of the BTR-3E1 houses the engine in the rear, driving compartment in front, and a troop compartment in the middle. The troops can enter and exit the vehicle through a door provided on either side of the vehicle. The lower part of the side door opens downward to facilitate easy movement of the troops.

The vehicle accommodates six members. It is fitted with a Webasto C6 HVAC system for the increased comfort of occupants. The vehicle is also equipped with TNPO-115 and TVNE-4B periscopes for visibility during day and night, respectively.

The BTR-3E1 is installed with a BM-3 Shturm turret system. The turret is fitted with a ZTM-1 30mm automatic cannon, and carries 350 rounds of ammunition. The ZTM-1 30mm gun can be operated remotely from inside the vehicle to reduce casualty to the troops.

"The BTR-3E1 APC is designed to operate in almost all terrains and provide better ride and safety to the troops."

The vehicle is armed with a 7.62mm coaxial machine gun with 2,500 rounds of ammunition. The BTR-3E1 turret is also fitted with six 81mm electrically-operated grenade launchers, three on each side of the turret, for better coverage of the field. It can also be fitted with a 30mm automatic grenade launcher.

The power plant of the BTR-3EI APC includes a DEUTZ BF6M1015 diesel engine coupled with an Allison MD3066 fully-automatic transmission. The engine can generate a maximum power output of 326hp. The engine chamber is installed with an automatic double-action fire extinguishing system.

The BTR-3E1 APC is designed to operate in almost all terrains and provide better ride and safety to the troops. The vehicle is fitted with a central tire inflation system (CTIS) for better mobility on different terrains.

The vehicle can cruise at a maximum speed of 85km/h. It can travel a maximum distance of 600km without refuelling. It can be operated in adverse weather conditions during day and night. It can negotiate a gradient of 30° and side slopes of 25°. It can cross vertical obstacles of more than 0.5m and trench obstacles of 2m.

The BTR-3EI uses a single water-jet engine providing a speed of 8km/h, when used as an amphibious vehicle.

The BTR-4 is an armoured personnel carrier (APC) with an 8×8 axle configuration.