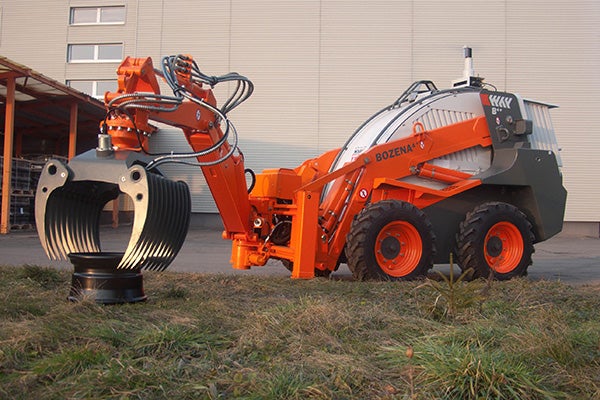 The Bozena 4 light mine clearance system designed and manufactured by Way Industry, a company based in Slovakia, clears anti-personnel (AP), anti-vehicle (AV) mines as well as pressure and tripwire fused mines.

The remote-controlled mini demining system has blast resistance against anti-tank mines of 9kg TNT equivalent and can be deployed to clear mines in areas with high-threat contamination. It can also operate inside forests and mountains, and along plantations and obstacles.

The system also supports counter-IED activities and is equipped with a variety of accessories and engineering tools to deliver improved efficiency in field operations.

More than 80 Bozena 4 vehicles are in service with humanitarian and military customers. Other variants offered by the manufacturer include Bozena 1, Bozena 2, Bozena 3, and Bozena 5 demining systems.

The MV-4 is a light tracked, remote-controlled mine clearance system produced by DOK-ING.

The Bozena 4 demining system performed survivability and performance tests against anti-personnel and anti-vehicle mines at the Croatian Mine Action Centre and Military Technical & Testing Institute in Slovakia in October 2002, Ethiopian Mine Action Office in May 2003, Turkish armed forces in September 2003, International Mine Action Training Centre in Kenya in October 2006, and in Sweden in September 2004. The mine clearance tests were also conducted by the Polish Army in December 2002.

In May 2004, the Azerbaijan National Agency for Mine Action (ANAMA) signed a contract with Way Industry for three Bozena 4 systems. The vehicle was deployed to conduct mine clearance operations at Baykal valley of Agdam region in October 2009. It was also deployed to clear anti-tank and anti-personnel mines along Turkish-Syrian border crossing point in August 2011.

The Bozena 4 light mine clearance system is designed to offer improved efficiency in demining operations. It can be transported by cargo aircraft or a helicopter.

The air-conditioned cabin of the vehicle provides superior safety and comfort working conditions for the crew. The vehicle is controlled by one operator and is configured with either wheeled or tracked chassis. It is also fitted with a hydraulic winch for self recovery in difficult field situations.

The Bozena 4 is covered with armoured shield fitted behind the flail shaft, for protection from anti-vehicle mine blasts and flying debris.

The light demining system is equipped with a range of hydraulics systems to achieve improved performance. The final drive circuit consists of variable displacement pumps and constant hydro-motors provided by Bosch-Rexroth. The working pressure of the final drive system is around 35MPa. The circuit of boom, tilt and winch consists of a gear pump and Bosch-Rexroth’s distributor and valves, and has a working pressure of 20MPa.

"The machine is powered by a four-stroke, turbocharged BF 6L914 diesel engine supplied by DEUTZ."

The machine is powered by a four-stroke, turbocharged BF 6L914 diesel engine supplied by DEUTZ. The engine generates a power output of 110kW at 2,500rpm and develops a torque of 550Nm at 1,600rpm. The oil and hydraulic oil capacities of the engine are 18l and 165l respectively.

The power pack also consists of six cylinders and an air-cooling system. The vehicle has a fuel tank capacity of 140l and uses direct fuel injection system. The average and maximum fuel consumption of the vehicle are 13.2l/h and 19.5 l/h respectively.

The demining system can attain a maximum speed of 9km/h and can operate up to a range of 5,000m when remotely controlled. The mine clearance width and depths are 2.2m and 250mm. The system is capable of removing tripwires and vegetation up to a height of about 4m.

Bozena 4 has a maximum working efficiency of 2,500m²/h based on the ground and terrain conditions. It has a battery life of 11 hours. The flail unit rotates at speeds ranging from 350rpm to 500rpm.