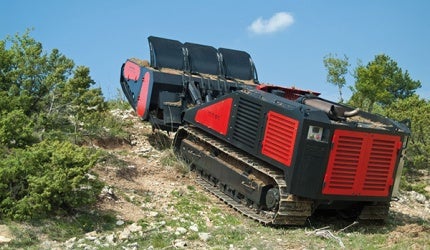 The MV-10 is a remote-controlled, tracked medium double tool mine clearance system developed by Croatia-based DOK-ING. The system can clear all types of anti-personnel (AP) mines, anti-tank (AT) mines and unexploded ordnance (UXO). It is the only medium class mine clearance system equipped with two standard tools including both a flail and tiller.

The MV-10 system was developed in 2005. It was tested and evaluated by international testing authorities such as the Croatian Mine Action Centre (CROMAC) and the Swedish EOD and Demining Centre (SWEDEC).

DOK-ING also produces the MV-4 mine clearance system which is in service with the US Army, Swedish Armed Forces, Sri Lankan Army, Croatian Army, the General Command of the Army of Nicaragua, Italian Army, Irish Army, Hellenic Army and Colombian Navy Marines.

"The system can clear all types of anti-personnel (AP) mines, anti-tank (AT) mines and unexploded ordnance (UXO)."

In 2008, DOK-ING delivered one system to the Lithuanian Army. ENIGMA, a demining company in Croatia, received a MV-10 system in 2009.

The MV-10 was selected by the Australian Ministry Defence for its LAND 144 Countermine Capability project. The production of eight MV-10 systems was began in 2009. The final system was delivered to the Australian Government in September 2010.

Four MV-10 machines are being deployed in Croatia by DOK-ING Demining.

Designed specifically to perform mine clearance tasks, the MV-10 is equipped with operating tools such as a tiller and a double flail for digging and mine clearance. Additional tools such as a roller and a blade are also attached. The standard operating tool fitted forward is specifically designed to destroy the mines and UXO as the vehicle moves forward.

The MV-4 is a light tracked, remote-controlled mine clearance system produced by DOK-ING.

The MV-10 is normally equipped with a combination of rotating flail and rotating tiller for mine clearance tasks. The flail tool is used to activate or shatter AP and AV mines, while the rotating tiller is used to capture the soil disturbed by the flail tool. The tiller also maintains the constant digging depth by transferring materials under the machine. The tiller and the flail can be operated both simultaneously and independently.

The machine can be used on the soil types ranging from I to V and can remove low, medium and high vegetation. It can penetrate soil to a maximum depth of 60cm based on the soil type. The flail hammers apply force to cut through dense vegetation. AP and AV mines are destroyed by the impact force created by the shaped tools. The hammers feature 44 flail chains and the tiller unit includes 60 chisels.

High quality armour is used to cover the vital parts of the machine. The engine and other key components of the vehicle are protected by HARDOX 400 steel armour plates. The impact hammers are made of steel can withstand mine blasts.

The system can withstand the fragmentation of land mines and standard 7.62mm Nato ball ammunition.

"The MV-10 is powered by a Caterpillar C18 6-cylinder turbo-charged diesel engine delivering a power output of 571kW."

The MV-10 is powered by a Caterpillar C18 6-cylinder turbo-charged diesel engine delivering a power output of 571kW. The vehicle consumes about 50l of fuel an hour depending on terrain and soil conditions. Fuel tank capacity is 480l and the Rexroth Bosch hydraulic system uses 400l of hydraulic oil.

The MV-10 is highly manoeuvrable and can turn 360° on a single point. It can drive and work on transversal slopes up to 25º and longitudinal slopes up to 37º. The machine requires a single operator and two mechanics for transport, operation and repairs/maintenance. The hammers, flail chains and tiller chisels can be easily fixed in case of damage.

MV-10 is road-transportable by a standard flat bed trailer and air-portable by the C-130 Hercules military transport aircraft. The system is shipped by sea under a 20ft container. It is provided with lifting points for craning.