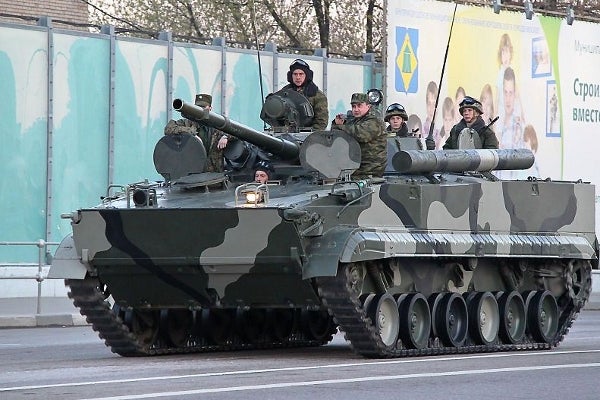 The BMP-3M / BMP-3U, an upgraded version of the BMP-3 infantry fighting vehicle (IFV), offers improved combat efficiency for the ground forces. It features superior fire power and protection over its predecessor. The chassis of the upgraded BMP-3 vehicle is developed by Kurganmashzavod and the turret is provided by KBP Instrument Design Bureau.

The armoured amphibious vehicle was exhibited at the International Defence Exhibition and Conference (IDEX) 2005 in Abu Dhabi, International Exhibition of Defence and Security DEFENSYS 2010 in Greece, and at Engineering Technologies 2010 forum in Zhukovsky. The vehicle was also demonstrated at the Russian Arms Expo (RAE) 2013.

The Russian Government finalised a contract for the sale of around 400 BMP-3M IFVs to Greece in March 2010. The UAE armed forces signed a $74m contract with Russian arms exporter Rosoboronexport to upgrade its 135 BMP-3 vehicles to BMP-3M standard. Final testing of the first upgraded vehicle was completed in February 2013.

The design of the modernised BMP-3M amphibious infantry fighting vehicle is based on the BMP-3 IFV, which entered into service with the Soviet Army in 1987.

The upgraded IFV can carry three crew members, including commander, gunner and driver, and up to seven troops. It is 6.71m long, 3.15m wide and 2.3m high, and has a ground clearance of 0.45m and combat weight of 22t.

The vehicle is equipped with air conditioning systems and filter-ventilator unit to offer comfortable conditions for the crew.

Armament of the upgraded IFV

The BMP-3M is equipped with a Bakhcha-U rotating turret module with two-axis stabilisation to provide enhanced combat capabilities.

Protection features of the BMP-3M

The vehicle is also fitted with Arena-E defensive aid suites to automatically detect and destruct guided and unguided anti-tank missiles and anti-tank grenades.

The vehicle is also integrated with thermal imaging camera, an AST-B automatic target tracker, a ballistic computer and an armament stabiliser.

Engine and mobility of the IFV

The BMP-3M amphibious vehicle is powered by a new four-stroke, ten-cylinder UTD-32T advanced turbocharged diesel engine, which generates a power output of 600hp. The engine is fitted with a two staged air cleaner and a cooling system.

The propulsion system provides a maximum speed of 70km/h on roads, a top speed of 10km/h on water, and a cruising range of 600km. The vehicle can negotiate a gradient of 35% and side slopes of 20%, and can cross a vertical obstacle of 0.8m and a trench of 2.5m.

The vehicle can conduct combat missions under various climatic conditions in temperatures ranging from -50 up to +50°C.