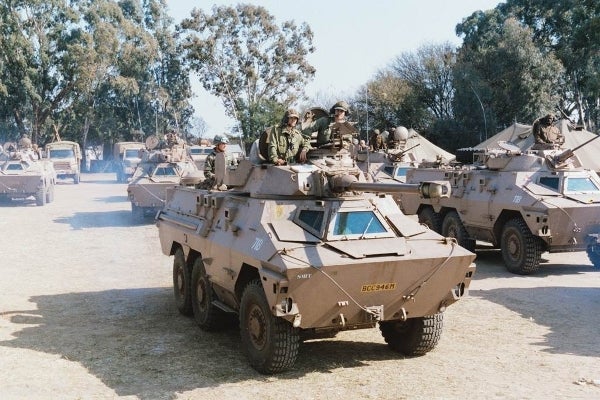 The Badger Infantry Combat Vehicle (ICV) is a new generation armoured vehicle being manufactured by Denel land Systems, for the South African National Defence Force (SANDF), under Project Hoefyster. The project includes delivery of 264 badger ICVs which will replace the 6×6 Ratel Infantry Fighting Vehicles (IFV) used by the SANDF since last 30 years.

The Badger vehicle will transport the SANDF mechanised troops during combat operations and provide them with superior firepower, increased mobility and an advanced level of armoured protection.

The Armaments Corporation of South Africa (ARMSCOR) awarded a contract to Denel Land Systems (DLS) to develop the Badger vehicles for the SANDF in 2007.

The first prototype of the Badger vehicle was delivered in 2010 to the ARMSCOR and the SANDF. The modifications, integration and testing are currently underway to make the vehicle suitable for the SANDF requirements. The Badger will enter into production phase by early 2015 and will replace the Ratel IFVs (also known as Honey Badger) by 2022.

Denel was awarded a ten-year multi billion rand contract by ARMSCOR for more than 200 Badger ICVs in September 2013. The number of ICVs acquired under the contract was reduced from 264 to 238 because of increased project cost caused by delays.

DLS signed an agreement with Patria Land Systems in November 2013 to use the Patria AMV 8×8 armoured wheeled vehicle platform design for the Badger vehicles. The agreement includes delivery of 238 platform vehicles, out of which five pre-series vehicles were delivered during the development phase of Badger.

The first 16 serial vehicles platforms will be assembled by Patria Land Systems in Finland, Hämeenlinna, initially. The production units will later be shifted to DLS South Africa facility. Land Systems OMC, a South African subsidiary of BAE Systems, will construct the hulls of the Badger ICVs.

ThoroughTec was contracted to design, develop and supply training systems for the Badger. The ZAR88.5m ($8.1m), seven-year contract was awarded in September 2007 for the delivery of 60 Badger simulators and eight instructor stations.

Design and features of Badger ICV

The Badger ICV is based on the Patria armoured modular vehicle concept. The design accepts modular components according to the specific requirements. Badger will be available in Section, Command, Mortar, Missile and Fire Support models.

The vehicles will include up to 70% of indigenous content and the internal layout of the AMV will be modified according to the requirements of the SANDF. The vehicle will be 8m long and 2.8m wide and carry up to 13 crew members. The highly protected vehicle will enable the crew to disembark and interact with the people during peace-enforcement missions.

Pretoria Metal Pressings (PMP), a division of DLS, will supply 30mm x 173mm ammunition for the ICV. The contract was awarded in 2007 to supply PRAC-T, APCI-T and Semi-Armour Piercing High Explosive Incendiary – Tracer (SAPHEI-T) rounds for the Badger ICVs.

Self-protection features of the Badger ICV

The all-welded steel armoured hull of Badger protects the crew from small arms fire and shell splinters. The vehicle is fitted with LMT Flat Floor Technology certified by Council of Scientific & Industrial Research (CSIR). It will ensure the vehicle to withstand landmines and improvised explosive devices (IEDs).

The Badger ICV will be fitted with Scania DC13 turbocharged diesel engine similar to that of the Patria AMV. The ICV will be able to attain a maximum road speed of 108km/h.