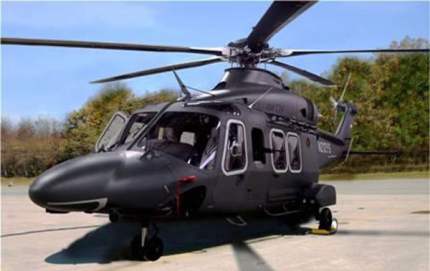 AW139M is the customised military variant of the AW139 multi-role helicopter manufactured by AgustaWestland, a Finmeccanica company. The AW139M is intended to meet the challenging needs of defence, homeland security and government customers.

In February 2011, AgustaWestland launched the AW139M helicopter equipped with state-of-the-art military equipment for the Common Vertical Lift Support Programme of the US Air Force. The helicopter was demonstrated at the AFA Air Warfare Symposium and Technology Exposition 2011.

The HH-139A, a search-and rescue version of AW139M helicopter entered service with the Italian Air Force in March 2012. A total of ten HH-139As are scheduled to be delivered by the end of 2012.

AW139M was used as a technology demonstrator for the US Army Armed Aerial Scout (AAS) flight demonstrations as the AW169 had been undergoing test flights for FAA and EASA certification. AgustaWestland plans to offer its AW169 military variant for the AAS programme.

The AW139M incorporates a damage resistant and fail-safe design. It features the largest passenger cabin in its class. The unobstructed cabin design ensures the troops to easily access the stowage compartment. The large cabin, with a volume of 8m3, can carry up to 15 troops or ten fully equipped infantrymen. The high ground clearance of the main and tail-rotor enhances the safety of troops and crew during entry and exit.

The modular floor and ceiling allow for rapid installation and removal of mission systems. The extensive space aboard the helicopter can be used to accommodate specific mission and role equipment. The cabin can be converted to accommodate additional operator stations for specific applications such as command and control. The two large sliding doors allow quick troop deployment in battlefield and recovery of stretchers in flight.

The firing of weapons is controlled by a weapon management system equipped with head up display.

The low thermal and acoustic signature improves the survivability of the AW139M helicopter. The cockpit and cabin can be equipped with ballistic protection. The crew protection is further improved with armoured seats. The helicopter also includes ballistic-tolerant, self-sealing fuel tanks.

The AW139M is powered by two Pratt & Whitney PT6C-67C turbines driving the five-bladed main rotor. Each engine delivers a maximum continuous power of 1,252kW. The operation of the engine is controlled by Full Authority Digital Engine Control (FADEC) system.

This project forms part of our recent analysis and forecasts of the global military aircraft market available from our business information platform Strategic Defence Intelligence. For more information click here or contact us: EMEA: +44 20 7936 6783; Americas: +1 415 439 4914; Asia Pacific: +61 2 9947 9709 or via email.