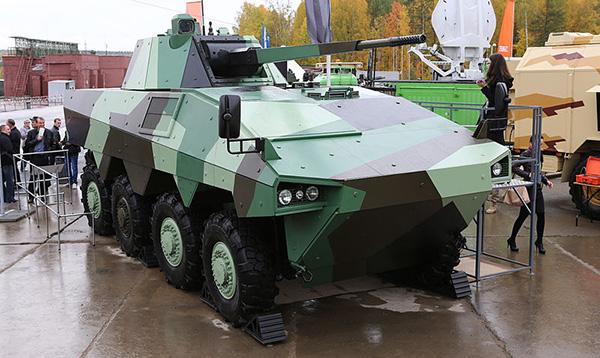 The ATOM is a heavy-wheeled infantry fighting vehicle (IFV) jointly developed by JSC Central Research Institute Burevestnik (a division of Uralvagonzavod) of Russia and Renault Trucks Defense (RTD) of France.

The prototype ATOM IFV was unveiled at the Russian Arms Expo (RAE) exhibition held at Nizhny Tagil in September 2013. A full-scale model of the vehicle was displayed at KADEX-2014 international exhibition in May 2014.

Design and features of ATOM IFV

An upgraded version of the BMP-3 infantry fighting vehicle (IFV), it offers improved combat efficiency for the ground force.

The chassis of the ATOM IFV is based on 8×8 VBCI IFV produced jointly by Nexter Systems and Renault Trucks Defense. ATOM features an all-welded hull with modular armour plates. The transmission, engine and fire control systems of the vehicle were designed by Renault, while the weapons system was developed by UralVagonZavod.

Its cabin offers a space of 10.7m³ to accommodate three crew members and up to eight troops along with equipment. It features one rear ramp, and four roof hatches for entry and exit.

The IFV is designed to provide transportation for motorised infantry subdivisions during combat missions and in battlegrounds. The vehicle can be customised to make it suitable for deployment in different operations. It is available in different variants including troop transport vehicle, infantry combat vehicle, ambulance, breakdown vehicle, and armoured police vehicle.

The exterior dimensions of the vehicle include a length of 8.2m, height of 3m, and width of 2.5m. The combat weight of the vehicle is 32t and the maximum payload carrying capacity is 7t.

The weapon system has an effective firing range of 6km and a rate of fire ranging between 120 and 140 rounds a minute. Time required for the change of ammunition type is one to three seconds. The turret has an ammunition storage capacity ranging between 180 and 200 rounds and ready to fire rounds of up to 100.

"The weapon system has an effective firing range of 6km and a rate of fire ranging between 120 and 140 rounds a minute."

The ATOM vehicle offers ballistic protection of up to NATO STANAG 4569 level 5. It is equipped with reactive armour and slat armour for protection against 25mm armour-piercing projectiles. In addition, it can be fitted with an active protection system, laser warning system, and chemical, biological, radiological and nuclear (CBRN) protection against weapons of mass destruction.

ATOM is powered by a RENAULT high-power diesel engine with 600hp output. It features an automatic gearbox, and transmission with independent suspension. The IFV is propelled in water by a pair of propellers fitted on the sides of the rear hull.

It has a maximum speed of 100km/h (62mph) and an unrefuelled range of 750km, with a ground clearance of 600mm (24in) and features run-flat tyres. The vehicle can be air dropped using Il-76 aircraft.