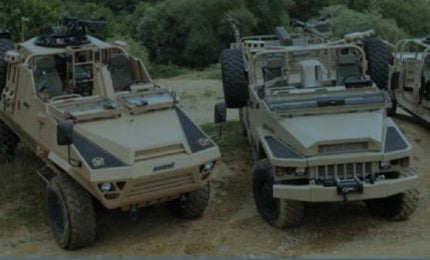 ALTV (Acmat Light Tactical Vehicle) Torpedo from ACMAT is a 4×4 lightweight multi-role vehicle intended for use by armed forces.

The vehicle can be used to carry out missions including utility, fire support, reconnaissance and border surveillance, as well as recovery, cargo / troop / personnel transport, patrol, and ambulance. It offers superior tactical mobility and off-road performance.

ALTV Torpedo was introduced into the market in 2009 and there are now over 1,000 vehicles in service accross 24 different countries.

ARMA is a modular wheeled armoured tactical vehicle designed and developed by Otokar in Turkey.

The ALTV Torpedo features a modular design and open cab structure, with a conventional layout accommodating a driver and up to nine personnel. It can be configured with different mission equipment to support multiple operations.

The front section has four seats, whereas the rear section houses two two-seater benches as well as two seats on each side. It features an air conditioning system, which ensures comfortable working conditions for the crew, as well as non-slip surfaces and dismantled wire cutter system.

Armament fitted to the ALTV Torpedo

ALTV Torpedo is fitted with a 360° weapon station to carry 12.7mm machine guns or LG 40 or MK19 weapons. It is attached with three swivel mounts to carry 7.62mm light machine guns (one at the front section and other two at the rear). The fire support vehicle can carry anti-tank and anti-air fire support systems.

ALTV Torpedo tactical vehicle can be equipped with mine and ballistic protection features. It offers protection up to NATO STANAG 4569 Level 1 standard against mines and projectiles. The aluminium protection under chassis protects occupants against mine explosions. Smoke grenade launchers can also be added to the vehicle for self-defence.

The ALTV Torpedo is powered by a 2.5l turbo diesel intercooler, which generates an output power of 140kW at 4,000rpm and a peak torque of 450Nm at 2,000rpm. The engine is coupled to a manual gearbox (six forward and one reverse), while the fuel capacity of the vehicle is 170l.

An independent double-wishbone front suspension system with coil-over shock absorber comes complete with the vehicle, as does a multi-leaf rear suspension with rigid axles. The power-assisted rack-and-pinion steering which is also provided ensures better driving comfort.

"There are now over 1,000 vehicles in service accross 24 different countries."

The brake system consists of front vented disc brakes and rear drum brakes attached with anti-lock braking system. The vehicle is fitted with four 265/75 R16 tires and carries a stepney at the rear.