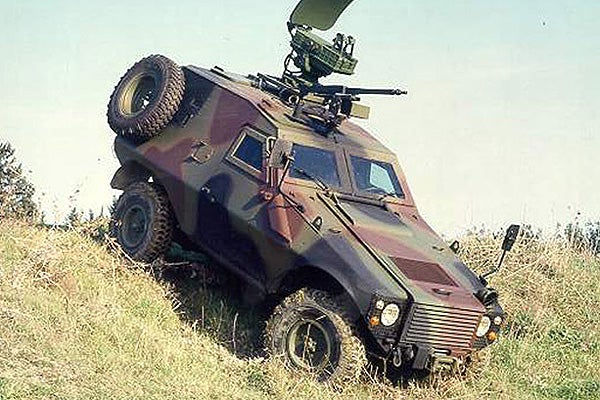 The Akrep (Scorpion) is a 4×4 special attack/defence vehicle developed and produced by Otokar. It was primarily developed for the Turkish armed forces. The vehicle was designed in 1990 and entered into production phase in 1994.

The Akrep can be operated effectively with the use of its enhanced day/night vision and aiming systems. The 4×4 drive capability and tactical characteristics of the Akrep make the vehicle efficient to operate in all terrain conditions.

The vehicle was developed to cater to the various needs of the armed forces. It is currently operational with the armed forces of Turkey, Pakistan, Morocco, Israel, Northern Cyprus, Georgia, United States and Iraq.

The Akrep is capable of conducting multiple missions such as convoy protection, light attack, surveillance and protection of sensitive areas and border security. The vehicle can be deployed to serve other mission specific requirements of users.

The Akrep vehicle integrates a monocoque steel armoured hull to protect the crew from small arms fire up to 7.62mm ball ammunition. The conventional vehicle layout of Akrep houses the engine in the front, crew cab in the centre, and troop compartment at the rear. The crew can enter and exit the vehicle through a single door located at both sides of the vehicle. The rear door allows for quick entry and exit of troops.

"The 4×4 drive capability and tactical characteristics of the Akrep make the vehicle efficient to operate in all terrain conditions."

The vehicle can accommodate a total of eight personnel including two crew members and six troops. It offers maximum survivability in high threat environments due to its ballistic hull design, special armour protection and high mobility.

The Akrep features an air conditioning system, a heater and a defogger for the comfort of the occupants. The vehicle is fitted with an infrared driving headlamp, a blackout lighting system and a roof mounted smoke extraction fan. The interior of the vehicle is completely lined for thermal and acoustic insulation. The vehicle is installed with a thick polyurethane roof.

The Akrep is installed with a 110l capacity fuel tank with an explosion suppression system (ESS) to ensure the fuel tank is explosion-suppressed.

The Akrep can be installed with several optional equipments such as a communications system, smoke grenade launchers, a pioneer kit, front-mounted electrical winch and a land navigation system.

The Akrep vehicle is armed with a 7.62mm machine gun mounted on a remotely operated weapon station.

"It offers maximum survivability in high threat environments due to its ballistic hull design, special armour protection and high mobility."

The power plant of the Akrep includes a four cylinder common-rail turbo-diesel (CRD) engine with intercooler. The engine, coupled with a manual six speed gear box generates a maximum power of 122hp at 3,500rpm.

Akrep is a four wheel drive vehicle. It includes a two speed transmission box with high and low ranges and a central differential lock.

The braking system of Akrep includes servo assisted front and rear disk brakes on all four wheels. The vehicle is fitted with a drum type parking brake acting on transmission. It is also installed with Hutchinson run-flat tires system to enhance the mobility.

The Eagle reconnaissance vehicle is manufactured by MOWAG Motorwagenfabrik in Kreuzlingen, Switzerland (owned by General Motors Defense of Canada) and is in service with the armed forces of Denmark and Switzerland.