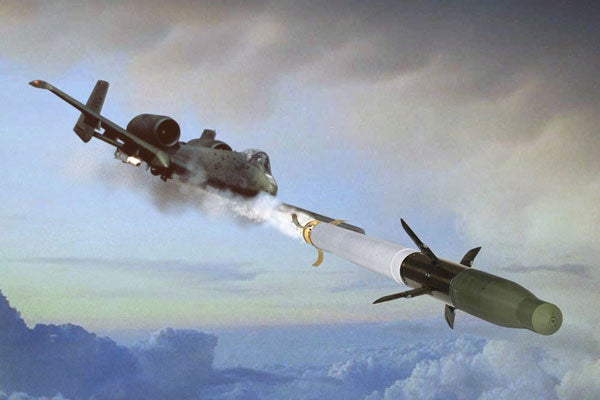 The Advanced Precision Kill Weapon System (APKWS) is a combat-proven, laser-guided 70mm rocket system designed and manufactured by BAE Systems in collaboration with the US Government. The weapon system is currently deployed by the US military forces.

The lethal weapon system can be launched from rotary-wing and fixed-wing aircraft and unmanned platforms to strike ground, air and sea-based targets, and also supports close air support operations.

A letter of offer and acceptance was signed between the US Navy and the Hashemite Kingdom of Jordan for the sale of the APKWS weapon in May 2014. The weapon system is equipped with Jordanian armed forces’ CASA-235 light gunship aircraft.

The US Department of Defense (DoD) placed a $2.7bn contract with BAE Systems for the procurement of APKWS II in September 2019. The weapon systems will be delivered to the US forces and foreign customers including the governments of Iraq, Lebanon, Netherlands, Jordan, Afghanistan, the UK, Tunisia, Philippines and Australia.

The advanced, highly precise APKWS rocket system features a point-and-shoot design and requires no maintenance. It is capable of engaging stationary and moving enemy targets with greater flexibility, while offering superior survivability for the crew.

The Advanced Hypersonic Weapon (AHW) is a demonstrative long-range glide vehicle capable of flying within the planet’s atmosphere at hypersonic speed.

The rocket system is equipped with wing assemblies and folding fins. Each wing is mounted with unique, low-cost laser seeker collection optics. The weapon system is also fitted with an MEMS inertial measurement unit and advanced digital signal processing technique for improved communication.

The APKWS is fitted with a plug and play compatible distributed aperture semi-active laser seeker (DASALS) guidance and control system between warhead and rocket motor. DASALS is used to transform unguided rockets into precision munitions. It allows the weapon system to engage soft and lightly armoured targets in restricted areas with minimum collateral damage.

The US Army transferred executive oversight of the programme to the US Navy and the USMC in November 2008. The design and development of the rocket system was completed in November 2009.

BAE Systems received the first low-rate initial production (LRIP) contract from the US Navy in July 2010 and the second LRIP contract in January 2011.

In February 2011, BAE Systems signed a $19.7m contract with the US Navy for a 27-month programme to expand APKWS’ capabilities from rotary-wing aircraft to the US Air Force’s (USAF’s) A-10 Thunderbolt II (Warthog) and the USMC’s AV-8B Harrier fixed-wing aircraft.

The US Navy gave approval to begin production of APKWS rockets for deployment from AH-1W Cobra helicopters, in April 2011 and the weapon system was successfully fired from a UH-1Y helicopter in October 2011.

The initial operational test and evaluation phase of the APKWS II programme was completed in March 2012. The rocket system was deployed to fight against insurgency forces in Afghanistan in April 2012.

“The rocket system is equipped with wing assemblies and folding fins.”

A Hawker Beechcraft AT-6C aircraft successfully fired the APKWS rocket in February 2012. The US Army and the US Navy conducted test firing of the weapon system from airborne helicopters at Eglin Air Force Base in Florida in May 2012. Using inert M282 and standard M151 warheads, the APKWS successfully engaged targets at close range.

APKWS was successfully fired from the US Navy’s MH-60S helicopter and engaged several maritime targets in April 2013. It was also test-fired from Bell Helicopter’s 407GT helicopter in Arizona in March 2013.

The USAF’s A-10 Warthog jet launched two APKWS rockets at altitudes of about 10,000ft and 15,000ft, at air speeds up to 348kts at Eglin Air Force Base in Florida in April 2013. The US Army’s AH-64D Apache helicopter successfully fired APKWS weapon in October 2013.