IEC’s Banshee system is a mid to long-range, radar-guided camera and threat mitigation system that lets friendly forces monitor very large areas for intruders or enemy forces. The mid or long-range radars give wide area detection of people or vehicles over a 360o area at ranges from 500m to 12km for people, and 1500m to 20 km for vehicles. 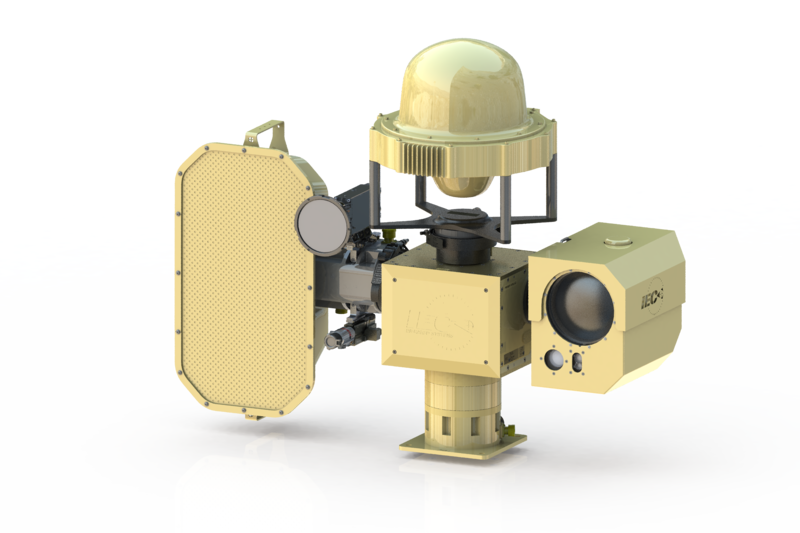 IEC’s Banshee system is a mid to long-range, radar-guided camera and threat mitigation system that lets friendly forces monitor very large areas for intruders or enemy forces. The mid or long-range radars give wide area detection of people or vehicles over a 360o area at ranges from 500m to 12km for people, and 1500m to 20 km for vehicles. When a target is found, a long-range thermal/visual camera can be precisely guided to the garget, allowing the operator to look at the target in day or night conditions, to determine if the target is a threat. The system provides an accurate location of the target, and can detect many targets at the same time. If the target is a threat the operator can engage several levels of non-lethal mitigation devices to deter and mitigate the threat.

The Banshee system can be mounted on a trailer-mounted tower so it can be easily moved, or it can be mounted on a permanent location. The system is easy to use, and uses software that can communicate with other DoD systems if needed. Banshee is ready for use right now and needs no development, but other sensors or systems can be added to it if needed.

The Banshee Active Denial Threat Mitigation System (Figure 1) uses mid or long-range groundsurveillance to detect targets such as people or vehicles at ranges of 500m to 12 km for human targets, and 1500m to 20 km for vehicle targets. Once a detection is made, the system can assess the target with a LWIR thermal and visual camera system, to determine if the target is a threat. The system provides accurate geolocation of the target, and can share that data with other connected systems using its fully integrated middleware. The same middleware also allows the system to accept detection cues from other sensors and systems that can be added to the system. Further, the system can be tailored with different radars and optics to create specific configurations that are optimised for scenarios where differing ranges are needed. Once the system detects a threat the operator can engage the intruder with several levels of threat mitigation to deter and mitigate the threat. This system is proven and in use in both commercial and US military applications.

Target Detection: Detection of ground targets is done with long range, KBand or mid-range S-Band ground surveillance radar (choice of radar is driven by mission specifics and desired range). The system can detect human targets at ranges from 500m to 12 km, and vehicles at from 1500m to 20 km. Unattended grounds sensors (UGS) can be added to the system to provide local detection in areas where terrain variations cause blind spots to radar detection. The system has user-selectable heuristics to prioritise targets, to help the operator determine which targets are the most important to examine.

Target Assessment: The longrange optics package utilises a medium wavelength infrared (LWIR) uncooled thermal camera with a 25mm-225mm continuous zoom lens and a 3.4mm-122.4 mm visual camera (Figure 2). The camera has optical tracking for hands-free-target tracking. The radar generates a target position allowing the camera to slew to cue to the target. The operator can then engage optical tracking using the long-range LWIR thermal camera. Other thermal imaging options are also available for both shorter and longer range applications.

Threat Mitigation: The Banshee System utilizes three levels of threat deterrence to impede the approach of human or vehicle intrusion. A 143db Long Range Acoustical Device (LRAD) is used to give verbal commands or extremely loud siren to impact the intruder’s hearing and cause disorientation The 12 million candle power white spotlight has a focusable lens to illuminate in wide or narrow FOV and can activate a strobe mode to impair intruder’s vision and disorient at night time operation. The green laser dazzler impairs the intruder’s vision day or night and uses a LRF to regulate intensity on targets within the 100m NOHD zone. Each of these methods are a non-lethal way to dis-orient and halt an intruder as well as making it impossible for the intruder to sight a weapon.

Ease of integration: Banshee comes with its own C2 system (Figure 3), which can be integrated with other C2 systems as well as additional sensors and effectors as required to meet changing threats and leverage new technologies that can further enhance the overall system. The C2 middleware also incorporates each specific sensor General User Interface (GUI) eliminating the need to open multiple GUIs to configure, calibrate and operate the sensors. All system platform control and configuration is managed by one interface on one work station by a single operator.

Scalability: Multiple Banshee systems can be emplaced and operated standalone in a given location or networked together to provide broad-area surveillance across vast areas. The system can be integrated with other DoD systems through Cursor-On-Target or TAC.

IEC Infrared Systems provides Engineering and Technical Support to DoD, Department of State and several Federal Agencies, and provided hardware design, manufacturing, software development, and onsite installation to these and other US Government and commercial customers.

Since 1999, IEC has designed and developed a range of turn-key, high-performance thermal/visual imaging solutions, including a new generation of advanced, state-of-the-art image processing systems and algorithms for a variety of missions, including vehicle-mounted operations. IEC integrates its imaging systems with a variety of imaging and non-imaging sensor systems (including radar, unattended ground and panoramic imaging systems, and remote weapons stations) to form comprehensive, integrated technical security solutions.