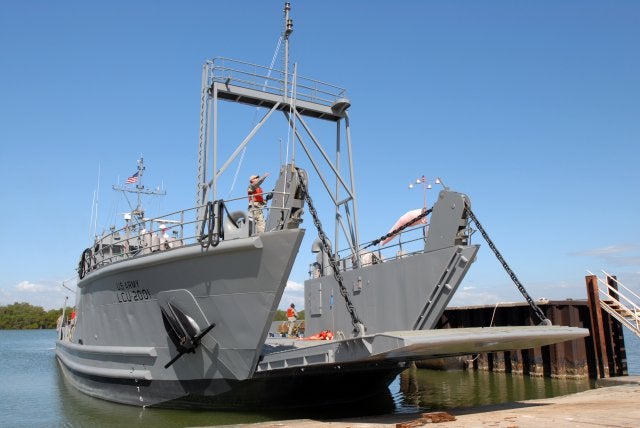 The US Army South deployed the first of its LCU 2000 series of watercraft during the recently concluded humanitarian-crisis exercise, Integrated Advance 2013, at Naval Station Guantanamo Bay, Cuba.

Known as Runnymede, the LCU 2001 was used to transport equipment of the Army South and the US Southern Command (SOUTHCOM), including tents and vehicles during the ten-day biennial exercise.

Runnymede was christened in 1987 and represents one of two LCU vessels that are under the Army South’s 24/7 operational control, which are operated in support of four basic operations.

"They provide immediate response to foreign humanitarian assistance and disaster relief efforts," he said. "And lastly, they support joint interdiction task force counter drug operations, and, as needed, support other components in SOUTHCOM."

The 175ft-long Runnymede USAV underwent a service-life extension in 2012, where it was restructured to help the army expand its use into the future.

Manufactured by VT Halter Marine, the LC 2000 are flat-bottomed boats used by the US Army for quick and efficient transport of troops and equipment, such as tracked or wheeled vehicles, containers and general cargo to shores, and also to areas that cannot be reached by other vessels.

Self-deployed or transported aboard a float-on/float-off vessel, the Army South’s LCUs have also participated in a multitude of missions, including the aforementioned Operation Unified Response in Haiti, New Horizons Haiti, Beyond the Horizon, apart from the iA drills.

Attended by 500 US service members and government officials, Integrated Advance 2013 exercise focused on enhancing the command’s readiness to support The Department of Homeland Security and the Department of State during a humanitarian crisis scenario.

The Department of Homeland Security