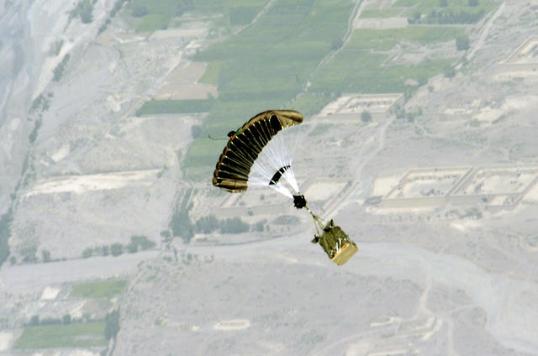 The US Army has taken delivery of the last 10,000lb joint precision aerial delivery system (JPADS 10K) under contract from Airborne Systems to enhance its ability to supply cargo to remote locations.

As part of an initial full-rate production contract awarded by the army in October 2007, the systems have been developed by the company based on its DragonFly-guided precision aerial delivery system.

Airborne Systems operations vice-president/general manager Dave Seifert said the systems have been delivered on time and according to strict military requirements.

"US Forces now have a system that will save lives by keeping service members out of harm’s way," Seifert said.

Airborne Systems JPADS programme manager Aaron Mebust added: "The JPADS 10K is the second Type Classified JPADS purchased by the US Department of Defense, following the selection and purchase of the FireFly as the system of choice by the US Army’s 2,000lb JPADS 2K programme."

"US Forces now have a system that will save lives by keeping service members out of harm’s way."

The system uses a GPS and an advanced guidance navigation and control algorithm for precise delivery of cargo in varying payload dimensions, from an altitude of 25,000ft within 150m of a designated impact point, to ensure ground troops safety.

Scheduled to be used by all services of the US Department of Defense, the system is capable of navigating more than 20km on its own prior to delivering cargo to a pre-programmed designated location.

To date, Airborne Systems has supplied more than 2,500 JPADS 2K and FireFly systems, and 250 JPADS 10K and DragonFly systems to the US and international militaries.

A joint US Army and Air Force programme, JPADS is designed to help combatant commanders maintain combat power by providing a high-altitude, precision airdrop system for use in the battlefield.