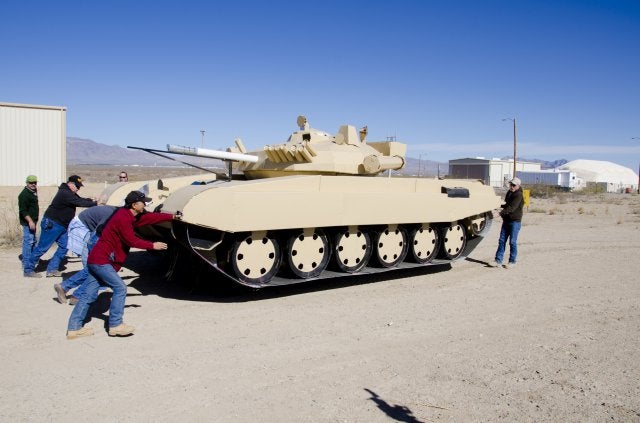 US Army engineers have developed a new mobile, remotely operated tank target to serve as foreign surrogate for cost-effective testing or training of a wide range of military equipment, including advanced sensors or weapon systems.

Developed from a set of simple plastic targets generally used for acquisition and gunnery exercises, the target also features heating units to support heat sensing equipment testing, as well as metal stripping, foil and plating for visibility on radars.

The remotely operated system is mounted on a light utility vehicle chassis similar to those used by golf course and park maintenance personnel for enhanced realism.

"The nice thing about this is that this is going to give WSMR and the Target Management Office the ability to do this here on site at White Sands."

Originally produced at the White Sands Missile Range, the target can also be used to represent other armoured vehicles, including the Russian BMP infantry combat vehicle, or the BTR amphibious armoured personnel carrier, by replacement of the outer shell.

The target is now being shipped to the Edwards Air Force Base (AFB) in California, US, for planned evaluation that will confirm it is an appropriately accurate representation of the intended vehicles, prior to deployment for validation of a new system.

However, the new systems will not be restricted to the forthcoming testing at the Edwards AFB.

"The nice thing about this is that this is going to give WSMR and the Target Management Office the ability to do this here on site at White Sands," Hoffman said.