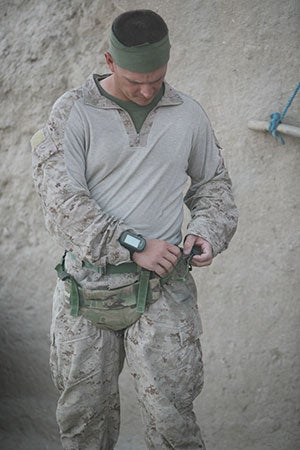 Developed in collaboration with the Program Executive Office Soldier (PEO-S), Natick Soldier Research, Development and Engineering Center, Joint IED Defeat Organization and the UK Ministry of Defence, the tool will allow validation of PPEs against a broad spectrum of secondary debris threats.

"The scientists will be able to understand and efficiently identify the penetration mechanisms of the secondary debris into a prospect material."

ARL Weapons and Materials Research Directorate mechanical engineer Tyrone Jones said the tool had been designed to quantify debris-resistant performance of combat fabrics, including Kevlar and jersey knitted silk, to approve their integration into existing PPE within a highly controlled environment.

"The scientists will be able to understand and efficiently identify the penetration mechanisms of the secondary debris into a prospect material," Jones added.

Candidate PPEs are placed in front of the gelatin block, and the amount of soil cloud retained by it, following passage through the materials, and the depth of penetration provides measure of damage that can be caused by secondary debris.

The tool has already helped ARL during testing of NSRDC-provided test materials, and its subsequent improvement into ballistic boxer shorts, dubbed the Pelvic Protection System, in 2011 to prevent groin injuries, and is also expected to support future army ballistic research programmes.

Image: A US Marine adjusts his Tier 2 Pelvic Protection System as he readies for a patrol in Helmand province, Afghanistan. Photo: courtesy of Cpl Christopher M Paulton.