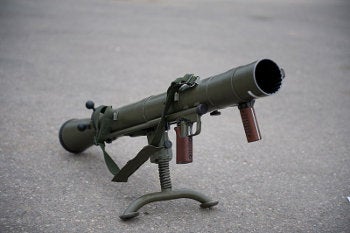 Saab has received a contract from the US Army and the US Special Operations Command (USSOCOM) for the delivery of 126 Carl-Gustaf man-portable weapon systems.

The combined Skr209m ($31.5m) contract is the first from the Army and follows the Urgent Needs Statement (UNS) to support the 3/10 Brigade Combat Team (BCT) and the 82nd Airborne Division, currently deployed in Afghanistan.

Under the contract, Saab will supply 84mm recoilless rifles to help troops in effectively engaging enemy rocket-propelled grenades (RPGs) and machine gun team attacks at ranges of 900m or beyond.

The existing weaponry, including the M141 Bunker Defeat munition, M72 light anti-tank weapon (LAW), M136 AT-4 and the shoulder-launched multipurpose assault weapon (SMAW) are only effective at a range of 500m.

The system can be used as a viable anti-armour weapon against larger stationary targets at a range of 700m, but the relatively low speed of the projectile restricts attacks on moving targets up to 400m or less.

The Carl-Gustaf is an 84mm reusable, shoulder-fired multi-role recoilless rifle that is normally operated by a two-man crew in armour-piercing to anti-personnel operations using high explosive (HE) as well as smoke and illumination rounds.

The weapon consists of a main tube with a breech-mounted Venturi recoil damper, a shoulder mount and iron sights with the attached 3x optical sight offering a 300 mrad field of view.

The iron sights are also equipped with luminous front and rear sight inserts along with an image intensification system for aiming during night or in low visibility conditions.

The Carl-Gustaf can be fired from standing, kneeling, sitting or prone positions with a bipod attached in front of the shoulder piece and a Venturi lock to move the hinged breech for reloading.

Caption: US places first order with Saab for Carl-Gustaf weapon to support missions in Afghanistan.