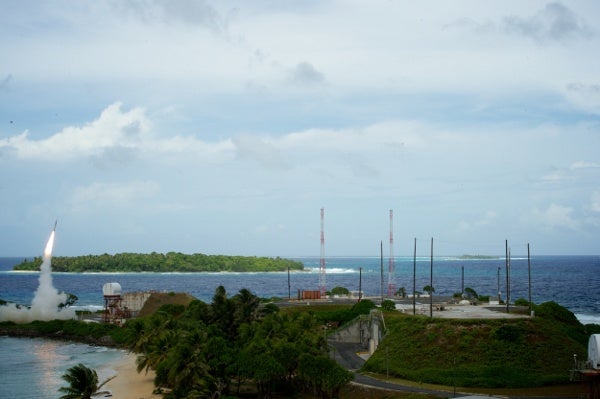 The Missile Defense Agency (mda) has completed the ballistic missile defense system (BMDS) flight test integrated-01 (FTI-01) live-fire demonstration at the US Army’s Kwajalein Atoll/Reagan Test Site in the Pacific Ocean and Hickam Air Force Base in Hawaii, US.

Demonstrations of simultaneous engagement of five ballistic missile and cruise missile targets were conducted jointly by the MDA, soldiers from the 94th and 32nd Army Air and Missile Defense Command (AAMDC), USS Fitzgerald’s sailors and airmen from the 613th Air and Space Operations Center.

USAF’s C-17 aircraft dropped an extended long-range air launch target (E-LRALT) missile over the ocean area north of Wake Island, which was tracked by the AN/TPY-2 X-band radar of THAAD system from Meck Island, until its destruction by the system’s interceptor.

"Testing was conducted to refine operational doctrine and tactics."

The missile was operated by soldiers from the 32nd AAMDC during the test, which marked the first-ever interception of a medium-range ballistic target.

Operated by AAMDC soldiers, the Patriot missile detected, tracked and successfully intercepted a SRBM target, which was launched by a mobile launch platform from Kwajalein Atoll, using a PAC-3 interceptor.

The DDG 62 was successful in engaging a low-flying cruise missile over water, while the Aegis system also reportedly tracked and launched an SM-3 Block 1A interceptor against a SRBM target.

Testing was conducted to refine operational doctrine and tactics, and the resulting telemetry and other data obtained from the test is used by programme officials to continue assessment and validation of the system’s performance.

To date, a total of 56 successful hit-to-kill intercepts have been achieved by the BMDS programme in 71 flight test attempts since 2001.