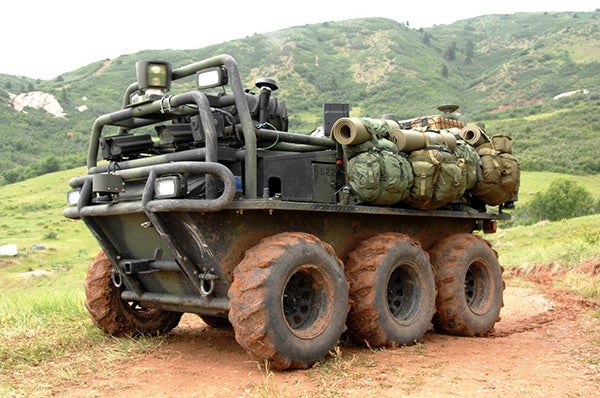 Lockheed Martin’s Squad Mission Support System (SMSS) has successfully demonstrated its ability to conduct unmanned autonomous operations while being controlled by a distantly located satellite during trials at Camp Grayling in Michigan, US.

Multiple battlefield surveillance operations were carried out by the vehicle during testing, while being controlled beyond line-of-sight through satellite from the US Army’s Tank Automotive Research, Development and Engineering Center (TARDEC) in Warren, Michigan, US.

"We are showing our customers innovative ways to employ SMSS vehicles in missions, while demonstrating that we are ready to move from technology development to fielding these valuable and mature new capabilities," Zinecker said.

"The concept of an affordable common mobility platform coupled with specialised mission equipment packages is the right answer for UGVs to reduce development, production and sustainment costs, while providing maximum flexibility for commanders."

"The concept of an affordable common mobility platform coupled with specialised mission equipment packages is the right answer for UGVs to reduce development, production and sustainment costs, while providing maximum flexibility for commanders."

As well as navigating autonomously with minimal operator intervention after receiving a pre-planned route from the operator, the vehicle also demonstrated additional autonomous functions, including follow-me, go-to-point and retro-traverse capabilities during the testing.

Lockheed has fitted the vehicle with different mission equipment packages to demonstrate its logistics, counter-improvised explosive device (C-IED), mobility, dismounted-soldier support, and reconnaissance, surveillance and target acquisition capabilities to the army during 2012.

Four SMSS vehicles were also validated by soldiers to reduce the soldier’s logistics burden during combat operations in Afghanistan in 2012.

The SMSS is an 11ft-long autonomous unmanned ground vehicle (UGV) primarily designed to provide logistics support for light and early-entry forces in the battlefield.

Image: The squad mission support system is the largest autonomous UGV to be ever deployed with the US forces. Photo: file image.