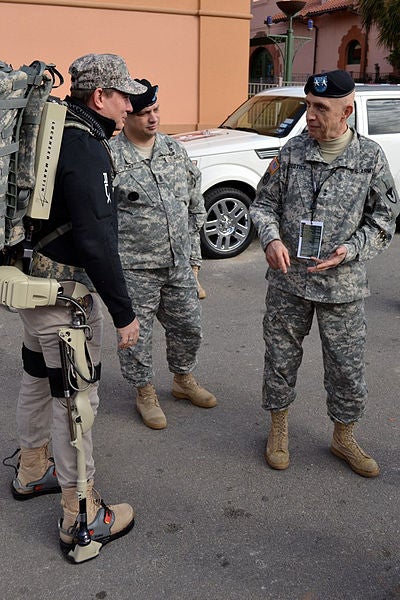 According to Tecca, Lockheed is currently evaluating the Protonex Technology-developed fuel cell power supply system, which will enable the HULC robotic exoskeleton to support more than 72-hours of extended missions on a single charge.

The company was awarded a $1.1m contract by the US Army NSRDEC in July 2010 for testing and evaluation of upgraded HULC units, followed by deployment to Afghanistan in late 2012, to help reduce logistic burdens on dismounted soldiers..

Featuring optimised control software, increased battery life and human factors improvements for user efficiency, the upgraded HULC system is comparatively lighter compared to its predecessors and can run for eight hours on a single battery charge, under heavy use.

The HULC is an un-tethered, hydraulic-powered anthropomorphic exoskeleton, originally developed by Berkely Bionics to provide soldiers with the ability to carry loads of up to 200lb at a speed of 10m/hr for longer duration of time in any terrain, with minimal strain on their body.

The robot has a flexible design, which allows for deep squats, crawls and upper-body lifting, and is also intended to reduce musculoskeletal injuries, occurring in soldiers due to lifting of heavy combat loads.

HULC provides dismounted soliders with a maximum range of 20km when moving at 4km/hour on level terrain, and can carry integrated systems such as heavy weapons, sensors, and heating or cooling systems.

The system has already completed laboratory testing in October 2010, followed by treadmill testing in various environmental conditions, including wind, rain, temperature and humidity testing at the Natick Soldier Center in June 2011.