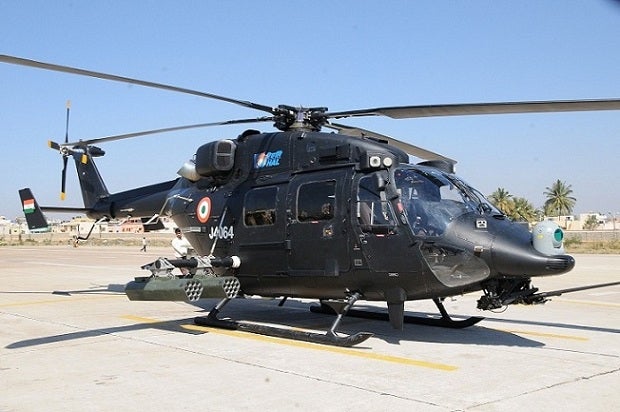 The aircraft was handed over during the Aero India 2013 exhibition, which recently concluded at Yelahanka Air Base in Bengaluru, India.

Commenting on the aircraft, Rajan said: “This helicopter is fitted with day and night targeting systems and can carry a mix of weapons (70 rockets, anti-tank missiles, air to air missiles and 20 mm turret gun), providing the required capability to search and destroy any targets.”

Indian deputy chief of army staff (P&S) lieutenant general Narendra Singh was quoted by local media sources as saying that the Rudra was a modern helicopter with advanced weaponry, and would lead forces to victory in any future battles.

“This helicopter is fitted with day and night targeting systems and can carry a mix of weapons, providing the required capability to search and destroy any targets.”

The aircraft received its initial operational clearance (IOC) from the Regional Center for Military Airworthiness earlier this month.

Fully designed and manufactured by HAL at the Rotary Wing Research and Design Center (RWR & DC), the Rudra is an armed variant of the Dhruv ALH and designed to carry out both utility and attack missions in the battlefield.

HAL is currently under contract to deliver 60 Rudras for the army and 16 for the Indian Air Force (IAF).