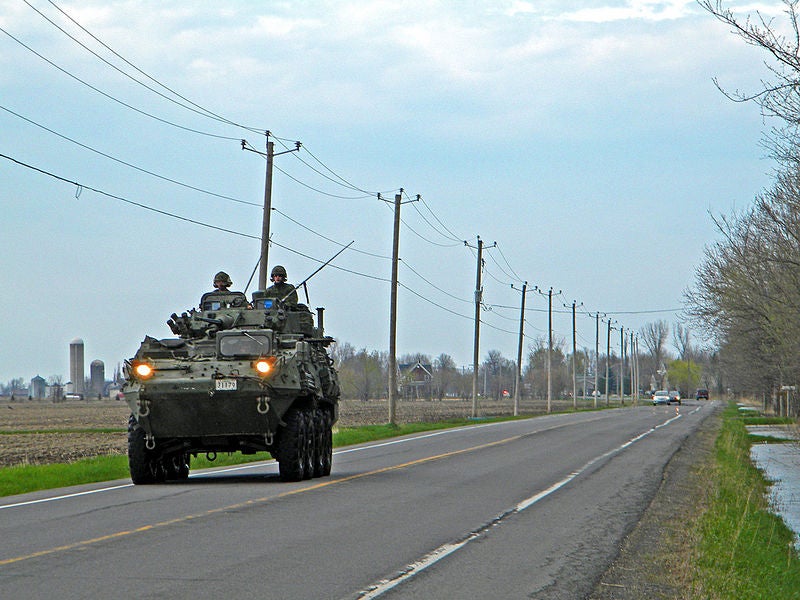 General Dynamics Land Systems-Canada (GDLS-C) has been awarded a contract to define and select an enhanced surveillance suite for integration into the Canadian Army’s LAV III combat vehicles.

The equipment is scheduled to be installed onboard 66 vehicles ordered by the army under a C$133.5m ($133.25m) contract awarded in November, following LRSS upgrade package implementation approval from the government.

The contract modifies the original C$1.06bn ($1.05bn) award secured by GDLS-C for modernisation of 550 LAV IIIs in October 2011, with an option for additional 80 vehicles.

Survivability, mobility and efficiency are to be enhanced in the LAV III upgrade project, eventually extending the fleet’s service life to 2035.

"The equipment is scheduled to be installed onboard 66 vehicles ordered by the army under a C$133.5m contract."

Survivability improvements include integration of double-V-hull technology and add-on armour protection, as well as energy-attenuating seats to improve the vehicle’s crew protection against mine blasts, improvised explosive device (IED) attacks and other threats.

A powerful engine, robust driveline and suspension and height management system (HMS) is also scheduled to be incorporated as part of mobility system upgrades to optimise the vehicle’s automotive performance, handling characteristics and payload capacity.

Work under the latest contract is expected to be complete by the first quarter of 2014.

The LAV III is based on the MOWAG Piranha IIIH 8×8 vehicle, with 651 LAVs currently operational with the Canadian Army as the primary mechanised infantry vehicles.