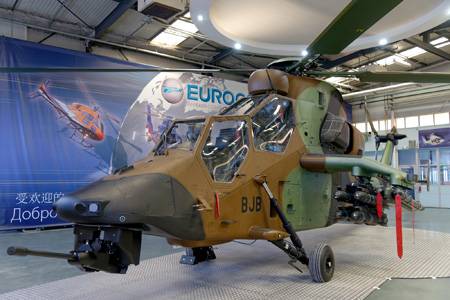 The French defence procurement agency (DGA) has received the first production Tiger Hélicoptère Appui-Destruction (HAD) fire-support helicopter from Eurocopter for use by French Army aviation units.

Received after the helicopter’s military qualification by the DGA on 10 April, the delivery is part of a contract signed by the Organisation for Joint Armament Cooperation (OCCAR) in August 2004 for a total of 40 HAD helicopters on behalf of France.

Eurocopter Group France executive officer and global business and services vice-president Dominique Maudet said: "With the Tiger HAD, Eurocopter further expands the operational capabilities of a combat helicopter family, which has demonstrated its mission effectiveness and performance in highly challenging military deployments."

Designed to conduct support and fire suppression missions, the helicopter can also be fitted with the PARS 3 LR anti-tank missiles, originally developed for the German Army’s UHT version, in addition to the AGM-114 Hellfire II air-to-surface missiles.

“With the Tiger HAD, Eurocopter further expands the operational capabilities of a combat helicopter family, which has demonstrated its mission effectiveness and performance in highly challenging military deployments."

Twenty four helicopters have also been ordered by the Spanish Army, which also features six Tiger HAP support and escort variants retrofitted for fire support and attack operations in December 2004.

The French Army plans to operate a total of 80 Tiger helicopters, which include 40 HAP and 40 HAD variants for its tactical missions worldwide.

The helicopters have extensively been used during the French military operations in Afghanistan, Libya and most recently in Mali.