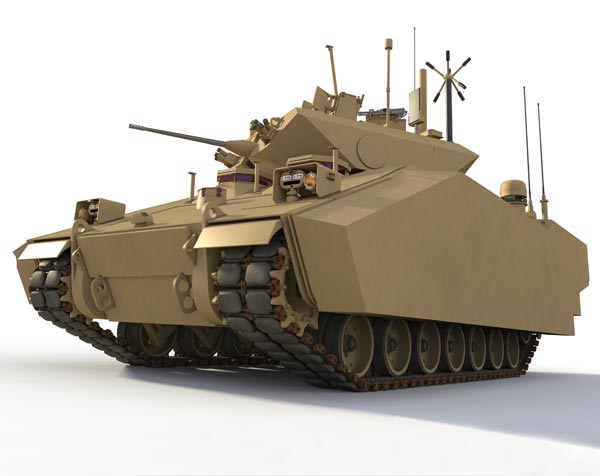 Bae Systems and Northrop Grumman have released details of their proposed vehicle for the US Army’s Ground Combat Vehicle (GCV) programme.

"The 1,500 horsepower HED is capable of providing 1,100kW of electricity and can run silently, which could be an advantage during night operations."

By using customisable combinations of armour packages on the hull, the vehicle can offer enhanced protection to troops in comparison with an RG-33 mine-resistant ambush protected (MRAP) vehicle.

The GCV is powered by a hybrid electric drive (HED) propulsion system for economical fuel use, although even with a mechanical drive the design could have saved the army 10,492gal of fuel over a 180-day campaign.

A 10% to 20% improvement in fuel economy is possible without compromising power, as an HED GCV can accelerate from 0mph-20mph in just 7.8 seconds, which a mechanical GCV would require 10.5 seconds to reach.

The 1,500 horsepower HED is capable of providing 1,100kW of electricity and can run silently, which could be an advantage during night operations.

In addition to fuel cost savings, the proposed GCV would require fewer parts and maintenance hours than existing systems, lowering operational cost to the army over the vehicle’s service life.

The hybrid GCV weighs some 70t and is almost twice as heavy as that of the Bradley infantry fighting vehicle, which it will replace under the $40bn GCV programme.